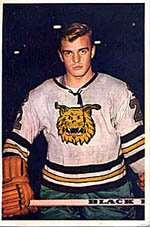 Jarmo Wasama would have been the first Finnish player in the NHL and maybe the greatest Finnish defensemen of all time if not for the fickle finger of fate. Wasama, a big kid at 6'1" 198 lbs, broke into the SM-liiga at age 17 playing for Ilves. He played six professional seasons for Ilves as well as playing on three World Championship teams and the Finnish Olympic team in 1964. At the time, he was the most talented defender to ever come from Finland -- big and tough, he was a superb skater and stick handler and thought the game extremely well. His teammates thought highly of him and gave him the assistant captaincy at age 21.

On the morning of February 2nd, 1966, he and his father were driving home from practice in dense fog with extremely limited visibility. Wasama was killed instantly when his car collided with a tractor stalled on the side of the road. Wasama was 22 years old. With two SM-Liiga titles and 74 international games under his belt, his international performances received attention in the NHL and he was likely a year away from becoming a Montreal Canadien. Wasama's number two was immediately retired and ten years later, the SM-liiga created the Jarmo Wasama Memorial trophy, awarded to the top rookie in the league each season.

The 2008-2009 winner of the Jarmo Wasama trophy was Teemu Hartikainen, a favorite around here. An in-depth look at the young Finn can be found by clicking the Teemu Hartikainen tag on the bottom right of the page. Hartikainen's rookie season was something of a shock, not because he won the Wasama trohy, but because of the historical context of the numbers he posted. 17 goals and 6 assists in 51 games might not seem like much, but it's the third best 18-year-old season in the last 30 years. Recent winners of the Wasama trophy include NHL players Jani Hurme, Olli Jokinen, Antero Nittymaki, and Oskar Osala, the Capitals prospect that spent the year in the AHL for the Hershey Bears.

After a season like this, expectations are high, and we've talked about the type of season that would be required to vault him into the upper tier of prospects. We've also talked about his shortcomings, namely acceleration and creativity. He's a straight-line bull that plays in the front of the net. He's strong on the puck and strong in high-traffic areas. One area that obviously won't be a problem is off-season training. The picture at the right shows the kid's physique and translating his strength from the SM-liiga to the NHL is a good bet. It seems like there is a good chance he's going to be the one to turn the Moreaus into the Mandelbaums, no?