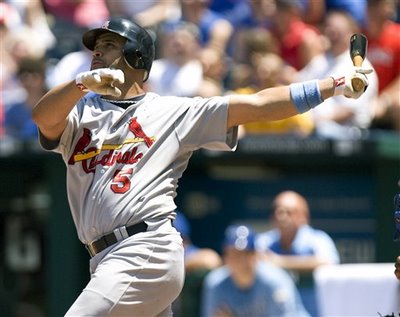 I think I must have inherited that part of my Dad's genetic code that loved the St. Louis Cardinals. It was something we shared from my earliest awareness of the sporting world in the summer of 1962, 'til the day he died just after the 2007 season. For both of us it was a passion that stretched from Stan (The Man) Musial to Albert (El Hombre) Pujols.

I saw only the tail end of the wonderful career of Stan the Man; similarly Dad saw only the first portion of El Hombre's dazzling career. Dad often regaled me with tales of Musial's legendary hitting exploits, such as the season he hit .625 in Ebbetts Field against the arch-rival Brooklyn Dodgers; today I can only reciprocate by thinking of my Dad and sharing vicariously Phat Albert's modern hitting exploits and ever-growing legend.

Fitting that Pujols came through with yet another huge game this Father's Day, with a 2 homer, 4 hit, 6 RBI performance, leading the Redbirds to a convincing 12-5 victory in Kansas City. The highlight was a fourth inning grand slam that broke open a 4-4 game. It was El Hombre's 9th career grand slam, tying the all-time Cardinals' record held by, you guessed it, Stan Musial. Through the magic of the Internet, a photo of today's slam appears up top, and video can be seen here.

If only I could, I'd be picking up the phone tonight and sharing a gloat with Dad. I'd no doubt tell him that Albert now leads the major leagues in runs, RBIs, homers, on-base percentage, slugging percentage, and of course OPS (by a spectacular 140 points). Dad would note that the Cards have extended their lead in the tight NL Central to 1½ games. And the man who got a masters degree in history would likely make some comparison across the eras, between dominant hitters past and present. 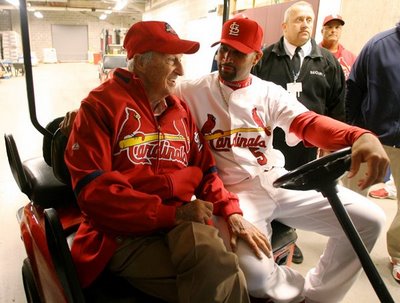 In researching this piece I came across this wonderful picture (and this photo essay) of Musial and Pujols, taken on Opening Day 2009. The Man is a frail 88, but still has a ready smile and, it would appear, the utmost respect of those who follow his path. Which is as it should be.

The old #6 and the current #5 have lots in common, both starting their careers in left field before finding a permanent home at first base in Busch Stadium. Yet they come from backgrounds as different as their eras. Musial is from Donora (Pennsylvania), Pujols from the Dominican Republic. Due to his skin colour, El Hombre wouldn't have been welcome in the major leagues when The Man started his career; how far we've come. And how lucky I was, having a dad who cheered equally and whole-heartedly for Bob Gibson, Lou Brock, Ozzie Smith, and Albert Pujols as he did Stan Musial, Red Schoendienst and Enos Slaughter. Or who cried equally for Martin Luther King and Bobby Kennedy. Not everyone was so enlightened in the days of my youth, nor even today.

I was incredibly fortunate to have such a dad, and especially to have him right into my 50s. Today I remember him with great warmth, and miss him with all my heart. 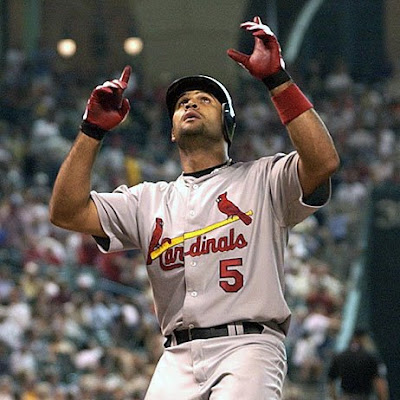