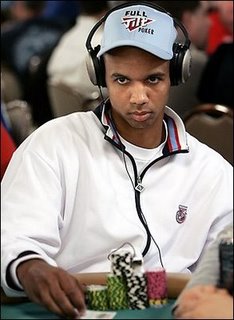 You are looking into the steely-eyes of a Phil Ivey stare. Ivey, the greatest poker player in the world, is renown for rarely changing the look on his face. Part indifference, part slow burn and part knowing arrogance, the stare is one of total intimidation. Ivey can read just about everyone, and no one can read Ivey. It's a true poker face. It's something that Steve Tambellini needs to learn before the off-season begins.

Tambellini moves into the off-season with his head squarely against the cap ceiling and has to make a couple of moves to navigate the Oilers through cap hell. The Oilers are going to need players that can outplay their contracts, period. One area where he should have no trouble finding an affordable and effective solution is in the net. No trouble, that is, if he can do his best Phil Ivey imitation and show indifference, knowing arrogance and seethe at agents just enough to get his goalies on his terms.

Below is the list of goaltenders with more than one post-lockout qualifying season, listed in order of save percentage. The list first surfaced here when discussing goalies that led their troops to a conference final. The fellows highlighted in red are the goalies that are available via free agency.

Other free agent goalies not on the list include Scott Clemmensen, Kevin Weekes, and Jonas Gustavsson. Goalies rumored to be available via trade include Jaroslav Halak, Christobal Huet, Josh Harding, and Kari Lehtonen.

In short, Tambellini should be able to spend less in goal than the Oilers have spent at any point since the lockout, and the Oilers should start the season with their strongest situation in net in this decade.