When I looked at the Oilers roster and cap situation, my conclusion was that Steve Tambellini will likely do a little bit of everything this off-season to get out of cap hell and remake the roster. Remember, this is a team that has already soaked up $53,245,000 without a starting goaltender, so the moves should be plentiful.

If Tambellini is going to sell high, Sheldon Souray has to go. From the previous entry: "Sheldon Souray will be 32 next year and is coming off of a fantastic season. Given his age and injury concerns, last season was the apex of his career. He's a premier power play defenseman and the Oilers could win a trade by moving him for a scoring winger."

So who might be interested in such a player? I can think of two teams -- both suffering mightily in the power play department -- Columbus and Dallas. 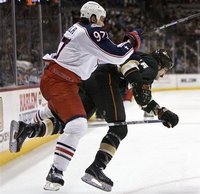 Columbus comes off of a season where they had the 30th ranked power play in the league, and it wasn't even that good. Things were so bad that Scott Howson traded for Jason Williams, a forward, to run the power play on defense. To go along with a desperate need for power play help, Columbus has cap room to spare. They also have Rostislav Klesla, the gritty defender with a defense first and last mentality. Klesla has one year left on his current deal at a cap hit of $1,600,000. Though injury prone, Klesla has averaged 60 games a year since the lockout, is only 26 years old and has already appeared in 444 NHL games. He's big [6'3" 220], he hits [he's averaged 1.3 hits per game in the last four years], he blocks shots [1.5 blocks per game] and he's been a top-pairing defensemen since he was 19 years old and has played extremely well when healthy. In 06-07 he was paired with Adam Foote and played all of the tough minutes. Last year, he was paired with Jan Hedja and again got all of the tough minutes. He can play the penalty kill as well. He's also a Czech, if the team is still trying to keep Hemsky happy. Klesla plus a couple of picks (a two and a three?) for Souray sounds about right.

The pros to the deal are obvious. Klesla would save the Oilers $3,800,000 against the cap. He's big and capable of tough minutes play. Columbus is a prior trading partner.

The cons to the deal are obvious as well. Klesla has suffered three major injuries and he's only 26. Also, Scott Howson is not an idiot. I would expect that he already knows that Souray's season was basically a fluke.

The other possible destination for Studley Wonderbomb is Dallas. Without Sergei Zubov, the Dallas power play was a bottomfeeder. Zubov is unrestricted this year, which frees up $5,350,000 to go directly to Souray. Dallas remains young on the back end and could use a veteran presence and the point shot. Coming back the other way? Left wing Steve Ott, the biggest pest in the west. Ott is not big, but he averages 2.5 hits per game. He's tough, though some say dirty, and he can actually play some tough minutes. He's a second grouping penalty killer and brings an element to the team that used to exist in spades. His cap hit is $1,425,000 and again, I think maybe Ott, a prospect and a higher pick would get this done.

The pros are again obvious. The cons are financial. Joe Nieuwendyk has already been told by Tom Hicks that he cannot spend to the cap and it's highly unlikely that the can fit Souray under the cap without moving someone -- the horrendous Marty Turco deal weighs the Stars franchise down heavily.

Both deals get the Oilers payroll down to $49,400,000 and give Steve Tambellini some wiggle room. Both deals require other, significant moves. We'll get to those soon.