Myths of the Northwest

Share All sharing options for: Myths of the Northwest 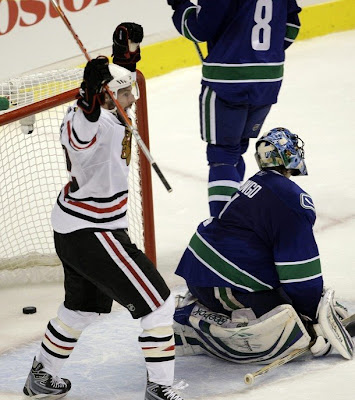 A popular myth maintains it's difficult for a dominant team to emerge in the Northwest Division cuz it's such a tough group top-to-bottom. There's no way to fatten up on the dregs the way Detroit has done for years in the weak Central, or San Jose did this year in the suddenly-soft Pacific. Every team in the poor old Northwest faces a "tough schedule".

In recent years this method has been complicated by the infernal Bettman Point, whose effect can be clearly seen above in that the worst division in hockey collected 53.7% of the available points. The Pts% of the league as a whole is a fluctuating value which seems to have found its level at ~.557 in each of the last three seasons, as about 23% of games reach overtime and generate the "free lunch" point.

Meanwhile the Northwest fares poorly by almost any standard: 5th in points (1 measly point ahead of the perennially poor SouthLeast), tied for 4th in Wins, 4th in goal differential, 6th and last in GF. Vancouver had the lowest points total of any division champion.

The local picture hardly improves for the post season:

That's just through two rounds of course, but three divisions including the Northwest will be doing no further damage in 2009.

The Central continues to dominate in the post-season, having produced both conference finalists and a guaranteed pennant winner. In the process the Central's second-best club, Chicago Blackhawks, handily dispatched both NW representatives.

Given that Southeast teams have won 3 series with Carolina still hanging around, it seems that division has surpassed the Northwest for overall performance in 2008-09. The inescapable conclusion is that the local group has been the worst division in the NHL this season.