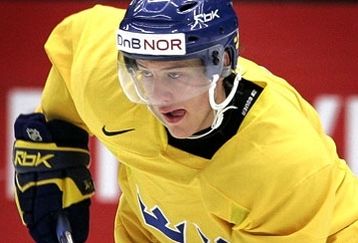 Semi-final day at the World Championships, and what's not to like? Russia-USA on now, followed by Canada-Sweden (noon MDT on TSN, not rebroadcast on tape delay until 1:30 a.m. -- believe it or not TSN is showing a rebroadcast of something called the Diamond Hill Plywood 200 during late prime time, an event which will have already just been shown on TSN2 for all those NASCAR buffs in their audience. Meanwhile people with day jobs will be left in the lurch for the IIHF World Championship semi-final. Sheesh.)

I'll be watching both games live, and doing updates on the Canada game here during the intermissions, with briefer entries in the comments section during the action. Do drop in and join me there.
Quarterfinal review -- Canada 4, Latvia 2
TSN just showed a weird stat that the four quarterfinals collectively produced 0 goals in the first period and 17 in the second. Say what? I watched much of the Canada-Latvia contest on tape delay, and while it was far from Canada's best game they got the job done against a Latvian group that hung in admirably. The 48-23 margin in shots -- including 22-4 in the decisive seond period -- suggests Canada was fully deserving of their 4-2 edge on the scoreboard. The Latvians twice cut a two-goal deficit in half, and had golden opportunities to do so again late in the third when Canada ran into penalty problems for the second straight game. Of particular interest was a rare 6-on-3 advantage the Latvians enjoyed with about 4 minutes left, but Chris Mason and the Canadian penalty-killers held the fort. Major contributors were Shea Weber (26:13 TOI, 6½ minutes more than any other defenceman) and Marty St.Louis (22:09, 5 minutes more than any other forward).
Pregame -- Canada 0, Sweden 0 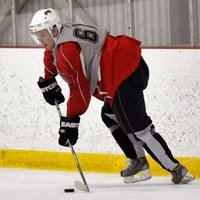 Unlike the other three combatants today, the Swedes have no current Oilers, but do feature Oilers past (Dick Tarnstrom) and future (Linus Omark, pictured above and at right). I caught some of Omark's flashy skills at that Millennium Place prospects camp, but nothing that foreshadowed the big splash he made this year in the SEL not to mention Youtube. Young Lee-nus has also done himself at the proud at the Worlds, where he leads the Swedes in scoring with 2-8-10.

A key player for the Swedes on the back end is the old war horse Kenny Jonsson, who logs major minutes, contributes on the scoreboard (3-3-6) and leads the tourney by a wide margin in plus/minus (+12).
Canada will continue to rely on excellent special teams, including an awesome powerplay that has been clicking at 43.9% on 18-for-41. The PK unit has been solid allowing just 4 goals on 39 opportunities (89.7%), including a couple of extended 3-on-5s and even that 3-on-6. Only Austria of all countries has a better PK rate, while Canada's PP is far ahead of the pack. Of particular interest today is Sweden, who rank middle of the pack in both categories at +8/-8.
Thanks largely to special teams and goaltending (combined .948 Sv%), Canada leads the tourney in both GF (39) and GA (12).
To paraphrase the old saw about statistics, all of the above and $7.75 will buy you a beer at Rexall Place. Or it would, if Rexall were (ahem) open for business.

Update: Lindy Ruff has shuffled his top two lines, moving Shane Doan on to the Spezza line and bumping Heatley to the port side. Derek Roy assumes Doan's former spot with Stamkos and St.Louis, with MSL presumably lining up on the starboard side. The explanation was that the Ottawa duo needed to be shored up defensively. That's what Doan already Was doing with the Tampa tandem. Speaks volumes about the wonderful two-way game that Marty St. Louis brings to the table, but is less complimentary of Spezza and Heatley. The one constant in all this is that whatever line Shane Doan winds up on, he will help.

Terrific first period. Both teams are flying, Canada a little higher and full value for the lead. What a beautiful goal it was, with tournament scoring leader Marty St.Louis burning Mattias Weinhandl along the end wall with a quick inside move, darting behind the net and drawing Weinhandl, the front-of-net defenceman, and the goalie to their right before slipping a back feed to Derek Roy lurking at the nearside post. With no defenders in sight, Roy merely had to make a high-skill play of taking the pass off the back of the cage, pull the puck just in front of the goal line, and roof one over a lunging Gustavsson from a very sharp angle. A sweet goal, especially for me. (I have "owned" both St.Louis and Roy long-term in my keeper league hockey pool, and am a big fan of both.)

Roy was flying all period, later making a superb play to receive a wayward pass outside the blueline, cut sharply to beat his man, drive wide and slip a seeing-eye pass through to Spezza for a dangerous deflection that Gustavsson did well to stop.

At the other end Roli was suctioning up pucks, wrapping himself around them and waiting for the whistle, secure in the knowledge that Canada has 3 guys in the top 20 in faceoffs, Sweden none. A couple of nervous moments in the late going though, especially when he failed to hold a muffin with a couple of seconds left in the frame.

On the blue, the impressive Drew Doughty has been paired with another fine youngster, Marc-Edouard Vlasic, with both getting Top Four minutes while Chris Phillips has been placed with Braydon Coburn on what seems to be the third pairing. The studly Shea Weber and Dan Hamhuis are clearly the top pair.

The comments section is rolling now so I'll keep this brief. Things continue to go well, with rapid fire goals by Horcoff at evens followed by Roy on the PP. Roli playing well. Swedes were bringing it at the end of the period, and will have a partial PP to start the third. Huge kill required ... I don't get the sense the Swedes are done, 3-0 or no 3-0.

Objects in the mirror were much closer than they appeared, as the Swedes carried their momentum into the third, dominating play in the Canadian end for shifts at a time. The Canadians seemed a step slow to loose pucks and had a terrible time clearing the zone. Inevitably the Swedes capaitalized with a goal 6 minutes in, as the Spezza-Heatley combination got burned yet again. As PDO mentioned, that pair has been on the ice for every ES goal against but one in the tournament, as well as the 1 shortie against Latvia. Great on the powerplay but ...

The Swedes continued to bring it as my knuckles whitened. The turning point was a penalty to Roy around 9 minutes in, which the Canadians killed far more effectively than they had been killing the clock at evens. The game stabilized at that point as the Candians raised their effort to match the Swedes, winning more puck battles and earning a far better distribution of zone time. Heatley and Spezza languished on the bench for the most part, as can be seen in Lindy Ruff's distribution of ice time:

While we're at it, let's look at the blue, where the new pairings achieved a clear hierarchy:

Any thoughts that Drew Doughty was being protected by Phillips can safely be dispelled. He has a poised all-ice game that is reminiscent of a young Raymond Bourque in that both looked completely at home in the NHL from Day One. Doughty has responded to his first World Championships by posting a creditable 8 GP, 1-6-7, +5 at age 19. Clearly Lindy Ruff likes what he sees; it's interesting to compare ice time for Doughty and fellow high draft pick (and fellow stud) Luke Schenn.

To finish the ice time review, Roloson played all 60 minutes between the pipes and delivered a strong performance with 25 stops. While Mason still has the statistical edge, Roli (2.20, .936) has faced the stronger opponents. Lindy Ruff has an interesting decision to make Sunday.

Speaking of Sunday, Oil Droppings will once against host a Game Day Thread. After an early-morning appetizer of Omark and O'Sullivan, the Gold Medal Game gets underway at half past Noon MDT. Canada-Russia, the classic rivalry, the rematch of last year's overtime thriller. The winner will be the first country to win 25 World Championships.