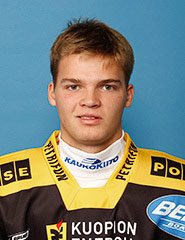 The most dangerous part of the internet, other than the HF and ON boards, is that you can get lost for hours when all you intended was to log on for a quick fact check. That happened to me last night -- I went looking for some world juniors stats and ended up hacking my way through more Finnish translations than I ever thought possible. If I keep this up, I'm going to be speaking Finnish in a month or so. In my travel down the roads that Al Gore wondrously paved for us, I found a January scouting report on Teemu Hartikainen from the SM Liga page.

Roughly translated, we get:

"Another pearl out of juniors from Kuopio. He will have a big role after Christmas in the U20 competitions. I saw that he was playing in Uppsala in the world championships prep tournament. He was the only Finnish foward to dominate on both ends of the ice. He was a man among the boys. Extremely sporty, ripe, target-oriented and honest player." - Tommi Kerttula, Totalscouting

Take it with a grain of salt, I'm not sure of the weight that a report from Tommi Kerttula carries. However, it seems that this is a guy with a skill set that the Oilers desperately lack. Run this against the pieces that are missing in the system right now:

I'm okay with the lack of creativity. Gagner has it in spades. He needs a goal scorer to do a ride-along with him.

Remember, Härski had an outstanding 18 year old season in the SM-Liga. He's going to win the top rookie award in the SM-Liga, he was the team's best player at the WJC. I'm comfortable with him as my number three prospect in the system.

From the comments on the page, it appears that Hartikainen's nickname is "Härski". Finns apparently nickname their teammates like Canadians do -- just add an "I" or a "Y". However, "Härski" translates to English as "Rancid". This is an absolutely awesome nickname.

Some fan descriptions from the comments:
Reliable, strong, plays intensely in both ends. Puts his whole heart into the team and does the heavy work. He is the Archetypal Finn: honest, hard-working, modest, humble but courageous and fights to the end. Always ready to help a teammate.

Canadian commentators have noticed the kid. His game rose a level in the last few games of the world juniors. Constantly developing.

And Härski is the future Selänne! The Finns have their own BryanBryOil!

A typical power forward, but I think that he has some skills deficiencies. Does not read the game well.

Hartikainen is only getting better as season progresses. This kid should savor the fun as long as it lasts. What a rare 18-year-old!

So the fan sentiments echo the scouting report. Strong like a bull, good straight line skater, great shot, one shot scorer, is a rough and tough kid. He doesn't think the game and lacks creativity. I'm rooting for the kid.