A Great Game Of Pool

Share All sharing options for: A Great Game Of Pool 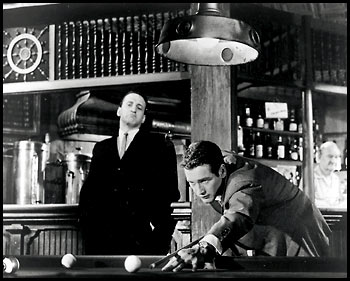 Pictured at the left are Steve Tambellini with Kevin Lowe in the background. They have a load of work to do this summer, and some tough decisions are required of them. A management group with a track record of getting hustled needs to pull off the hustle and avoid a pair of broken thumbs. They've got a team within shouting distance of the cap last year and ended with the 10th overall pick. Most of those same players are back this year. That's, how you say? Ah yes, not good. Looking at the commitments of this team for the coming season, the gentlemen in the picture have a variety of options, but given the recent history of non-draft personnel moves, the fanbase is extremely rightfully uneasy over what's about to happen.

Let's start with the commitments for next year.

1. Stand Pat. Looking at the lines above, there is enough for an NHL roster. Sign Craig Anderson and you're off and running. On a scale of one to ten, the likelihood of this happening? 0. Kevin Lowe never stands pat, even when he should.

2. Blow it Up. There are a number of crazies in the Edmonton media suggesting a trade of Ales Hemsky. There's no way that the Oilers could ever win this trade unless Ray Shero gets drunk and does Malkin for Hemsky straight up. Trading Hemsky would signal five year plan part three and would mean that this really is Tambellini's team. It would also signal that Tambellini has significant brain damage.

3. Sell Low. Dustin Penner was unfairly blamed for the team's woes by the thankfully-departed raving lunatic that ran the team last year. He's been dumped on in the media and by the fans. Right now, his trade value at it's lowest. Rather than allow the new staff to work with him, Tambellini could decide that Penner's $4,250,000 could be better-used on an enormous offer to Marian Gaborik, regardless of the return that Penner brings. There's no way to win a trade of Penner right now. Robert Nilsson falls into this boat as well. He fell out of favor with the raving lunatic and was trashed in many corners, despite playing...alright, actually. Marc Pouliot, another favorite of the raving lunatic, also fits here. Selling low would be an easy way to clear $7,075,000 from the cap and appease blood-lusting fans in the process. Doing so would be regarded as a slap in the face to Kevin Lowe by some.

4. Sell High. If there are still general managers that go by "saw him good" then the Oilers could take a couple of guys that had remarkable years (in the eyes of the "saw him good" types), not likely to be duplicated for the rest of their careers. Sheldon Souray will be 32 next year and is coming off of a fantastic season. Given his age and injury concerns, last season was the apex of his career. He's a premier power play defenseman and the Oilers could win a trade by moving him for a scoring winger. Ethan Moreau falls into this camp as well. He's going to be 33, but he's coming off of a 14 goal season and is well-regarded for his toughness, penalty-killing and leadership. Selling high would clear $7,400,000 from the cap and show that Tambellini has an understanding of personnel management in a cap world.

5. Housecleaning and Free Agency. The dead weight is shipped out at the draft and getting rid of Staios and Moreau clears out $4.7 million in cap space and the Oilers go shopping for Jaromir Jagr in free agency. If they land him, it's likely that Nilsson would be traded as well.