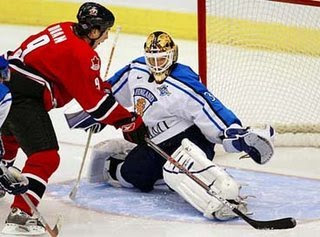 ***
SPOILER ALERT --
If you are planning to watch today's World Championship game on tape delay and don't want to know what happened, don't read on ... (until later please!). Thus for now I am not recording the score in the subject header, but it will be revealed in the text that follows. All I'll say about the game up top is that it was a fun game to watch.

It's been clear sailing for Canada so far at the Worlds, with an unbroken run of convincing victories. Have watched all or part of every game until yesterday's date with overmatched Norway, who did themselves proud by holding red-and-white to a modest 5-1 result. Norway scored the first meaningful goal allowed by Canada at the tourney, as it briefly tied the score midway through the first. The other 5 goals allowed by the good guys have all occurred with the team enjoying at least a 5-goal lead! This "home and cooled out" effect has resulted in some sloppy third periods, while both halves of the former Czechoslovakia significantly outshot Canada over 60 minutes. A great powerplay hides a lot of sins, but it's not all sweetness and light with Team Canada 2009.

Today's match-up with always-tough Finland is perfectly timed to give the squad a harder tune-up just before they play for keeps in the medal round. First place in Group F is on the line, as the Finns can overtake Canada by taking all 3 (!) points with a regulation win.

With the recent additions of splendid young blueliners Braydon Coburn and Marc-Edouard Vlasic, Canada now has a wealth of riches on the back end. However just Travis Zajac was added up front. With the departure of James Neal due to an unfortunate eye injury, the forward ranks is down to exactly 12 players, with Ian White pencilled in as a swing man. Not sure why the team used yet a 9th defender, Joel Kwiatkowski, in a couple of preliminary games that they easily could have won shorthanded. Because they did, the club has now used the maximum 25 players and needs to stay healthy up front from here out.

Dwayne Roloson starts in goal for the biggest game of the tourney so far; the break in the rotation that saw Mason play the Norwegians yesterday appears to have been done to accommodate Roli in the #1 role. Nashville's Pekka Rinne, who this Oilers fan has seen far too much of this season already, starts for Finland.

Game on. More to come at the intermission.

First intermission -- Canada 1, Finland 2
Finns came out like gangbusters, more or less exactly as I had expected and hoped, and Canada was no match for them early on, as I half-expected and feared. The first 10 minutes were a fire drill and Canada had no idea of the escape routes, constantly pinning themselves in outmatched situations. The Roy-Spezza-Heatley line had a dreadful time of it, conceding both Finnish goals and a couple more chances of the Golden variety. The Finns were harder on the puck, more physical, more opportunistic, more everything. Exactly what the doctor ordered, frankly.
The red-and-white finally began to respond in the last third of the period, led by a dominant grinding shift by the Upshall-Lombardi-Armstrong trio. Upshall had a great shift, nearly scoring, decking Rinne in the crease while somehow drawing a penalty, and a scrum ensued which dispatched one more from each team to the box. The puck even wound up in the net, just after the whsitle unfortunately.
Still, that set the stage for the deadly Canadian powerplay, which clicked quickly to cut the lead in half. Spezza PP (St.Louis, Weber) has been a pretty typical outcome of a Canadian man-advantage, and it couldn't have come at a better time. The game is now stabilized with lots of time left. The Finns are continuing to bring it, but Canada is starting to match their speed and intensity.
Late in the period the Helicopter Line of Horcoff-Zajac-Fisher had an outstanding shift, with Horc making a great play to win a puck battle, slip the disc through to Zajac, and back up into perfect position for a booming one-timer which just missed the post.
So the grinders are doing their jobs, and the snipers are starting to do theirs. The defence needs to calm down a bit and stop pinching, as the Finns are clearly attacking the holes they leave behind. Roli needs to settle down a tad too, he's fighting the puck. Fortunately, he fought a few pucks to successful outcomes, by no means is the 2-1 deficit on the goaltending.

Second intermission -- Canada 2, Finland 3
The Finns continue to bring it, and the Canadians more than has their hands full today. TSN had the shots on net at 37-20 Finland just before the end of the period. A significant contributor that period was a series of 5 minor penalties to Canada in not much more than 10 minutes. After killing consecutive 4v5 situations, Canada got a brief powerplay that got cancelled by Doan's infraction which was apparently "two minutes for whacking at the rebound". Then Hamhuis got "two minutes for being strong on the puck", and Canada was facing an extended 3v5. A great sequence ensued with Horcoff, Weber and Vlasic playing the triangle with textbook precision.
But when Doan took yet another minor (his third, Canada's fifth of the period) the goal seemed ineveitable, and Niko Kapanen quickly made it so. That made it 3-1 late in the second. Fortunately Canada was quickly given a consolation powerplay and just as quickly converted, this time a snipe by all-time scoring leader Dany Heatley on a sweet deflection of Roy's bullet pass. That's 2-for-3 against a Finnish PK unit that entered he game at 96%.
Two incidents involving the ever-entertaining Jerkko Ruutu, both with happy outcomes. First of all Shea Weber just hammered him hard into the end boards. Ruutu went down and stayed down, apparently dead or quadriplegic, for about 1.5 seconds when he realized that Mr. Stripes wasn't buying, so he hopped to his feet and got into the play. I'm certain it hurt at least a little -- Weber really crushed him. :) Then in the dying seconds Jerkko got into it with Steven Stamkos, drawing two retaliatory shots from the youngster. Again Ruutu went down and, with the whistle already safely blown, stayed down, milking it for everything it was worth. Which turned out to be two minutes to each player. Ruutu's was for diving, a gutsy but correct call. It would seem European zebras have seen Jerkko's act before.
On to the third. Canada needs one point from this game ... tying it up and getting to overtime is all that really matters at this point. Still, would be nice to come all the way back and win it. It's a tall order, today.

***
Third intermission -- Canada 3, Finland 3
Tie is of the essence. Canada has wrapped up first in the group and a quarter final match-up with Latvia, courtesy a third powerplay goal. The Ottawa teammates who each scored earlier in the game, this time teamed up on a fine rush and pass by Spezza and solid finish by Heatley with his second goal in a row. Nervous moments at the end as Finland pulled the goalie to go for the regulation win, and even got a PP with 8 seconds to go. The PP will carry over into the immediately impending OT, but the outcome of the game is already in.
***
Postgame -- Canada 3, Finland 4 (SO)
An uptempo overtime and an entertaining shootout later, the Finns emerge the "winners" even as Canada wraps up first place. Under quirky international rules, the shootout briefly became a one-on-one between St.Louis and Ruutu. Both went 2-for-3, with each connecting on a pair of backhands before missing on the forehand. St.Louis is the only shootout specialist I'm aware of who goes to the backhand the whole way, not just at the end of a deke but carrying the puck towards the net. Finland finally put it away in the 7th round on a nifty move by Hannes Hyvönen, the 4th puck to elude Roli in the showdown.
Back to the real hockey game which preceded it, where Roli certainly did deliver the goods, stopping 47 of 50 shots. A couple of bad rebounds, and a poor puckhandling play which led to the 3-1 goal, but a whole lot of solid stops and general hanging in there under pressure. Roli's confidence grew as the game went on, as he increasingly got into the faces if not the heads of the Finnish shooters.

Canada has a wealth of riches on the blueline with several guys making their case for an Olympic spot. I expect 7 of these guys to be at Olympic camp this summer. Shea Weber is the clear #1 on this club, playing 24:31 including nearly 11 minutes in the third and 5-minute OT. His partner and Nashville teammate Dan Hamhuis also soaked up the ice time again today. Given their ongoing solid play Stevie Y & Co. will have to seriously consider them as a pair. The new additions Vlasic and Coburn formed a second effective pairing, while Chris Phillips and Drew Doughty show an effective mix of experience and exuberance. Doughty and seventh man Luke Schenn are both on the radar for 2014, but the other guys have a legitimate shot at Vancouver 2010.

Same can be said up front, where only Doan and Heatley are likely comfortable with their spot in Vancouver, but St.Louis and Spezza are proving their worth on a nightly basis in Kloten. Meanwhile, guys like Horcoff, Roy, Fisher, and Lombardi may all be vying for the same spot of 13th forward in February.

Of more immediate concern is the current tournament, where all of the above are comfortably in the top 12 and contributing to Canada's greatest strength in the international scene -- depth of talent. We got at least two teams worth of wannabe Olympians, thus can always ice a competitive team even when the European season is over and half of our teams are still involved in the Stanley Cup playoffs. It's the healthiest form of competition, where each guy makes his personal case by being a good team player.

On to the quarterfinals, where Canada faces Latvia on Thursday morning, 08:15 MDT. Not quite a bye, but by (barely) passing today's test Canada has earned an easier route in the medal round, and acquired some badly-needed battle scars in the process. An excellent dual result.

I like our chances entering the sudden death round. Then again, I say that every year. :)