Several sources have suggested that Martin Hanzal is on the block in Phoenix after spending a stretch in the press box. My original reaction was shock - Hanzal has been quite the player since his debut two years ago. Why is there even a rumor about trading him? For the last two years, Hanzal has been chopping wood on a Phoenix squad that hasn’t been good and he's done alright by himself.

Remember, he got this assignment as a 20 and 21 year old. If this rumor has a tinge of truth to it, it seems that Phoenix management has decided that Lombardi, Turris, Mueller and Reinprecht are sufficient going forward. This is an understandable position - a team can only carry so many kids and develop them properly. They feature Mikkel Boedker, Kyle Turris, Peter Mueller, Viktor Tikhonov, Lisin, and Keith Yandle all 22 or younger. In addition, they've got Winnik, Lombardi, Prucha, Nigel Dawes, Prust, Lindstrom, Upshall, Michalek and now backup Al Montoya all 26 and younger taking regular shifts. 15 guys 26 and younger, they need some veterans.

If the rumblings pan out, Hanzal should be a highly desired commodity by a number of teams. To begin with, he is still on his entry level deal through next year - with a base of $850,000 and a cap hit of $980,000. He's 6'5", 210 lbs and still filling out. He's certainly got the pedigree, he was selected in the first round by the Coyotes, 17th overall in 2005. Let's steal a page from Lowetide's book and check out the scouting information from his draft year.

1. Martin Hanzal/LC — Budejovice. 6-3/190. 20 Feb 87. Impressive mix of size, skills and vastly improved skating; now has power in stride with good speed and acceleration. Strong on the puck. Does a good job finding open teammates, sees the ice well. Drives through checks. Competitive along the boards and goes to the net - dangerous from in close. Scores regularly at this level but is not a natural finisher and his shot needs lots of work. Willing to work defensively. Has very good upside.

Central Scouting ranked him the #2 prospect in Europe in their final rankings. As a 19 year old in the WHL, he played 60 games and went 26G 59A for 85 points in Red Deer.

According to the reviews he had all of the natural tools, plus the much-loved "jam" but needed work on his offense, specifically his shot. The early returns in the NHL bear that out through his counting numbers. As a 20 year old rookie, he played 72 games and went 8G 27A for 35 points. This year, as a 21 year old sophomore, he's played in 71 games and has put up 11G 20A for 31 points. There is nothing great to see here, but even the scouting reports seemed to indicate that his scoring was going to lag while he developed.

If he's not carrying the scoring on the ice, why would he be a sought-after commodity? Every other part of his game. To wit: 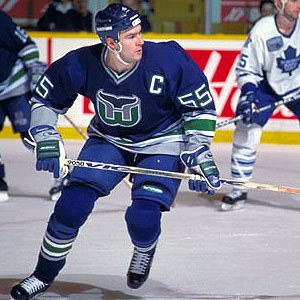 So what would Phoenix want in return? As we've see above, probably not another young roster player. If that were the case, Hanzal wouldn't be on the block. Doan and Reinprecht are the only veteran forwards on the team and the latter is an unrestricted free agent this offseason. It seems a veteran forward would be coming back, but given the financial situation of the franchise, a substantial contract can't come back, so a package deal created on NHL 2K9 won't happen. Gretzky will probably be looking for an impact veteran with some leadership to compliment Doan. The accelerated graduation pace of that aforementioned youth has left the system a bit short, so a higher-level prospect should also be included in that package.

There are a number of teams that with an obvious need for the current version of Martin Hanzal, let alone the need for the player that Hanzal should become. Calgary is getting extremely old up the middle [Conroy, the tough minutes center is going to turn 37], and can use a shot of youth. However, the Flames system is one of the least plentiful in the league and there really aren't any veteran assets to move that are affordable. Dallas is in similar situation, and has no movable contracts up front. Philadelphia is a team that will be desperate for cheap help next year, but they've saddled themselves with bad contracts in Lupul and Briere. Vancouver might lose Sedin and Sundin, but the pieces aren't there to deal either.

Edmonton is in desperate need of a second tough-minutes center and has two affordable veteran forwards that fit the bill in Pisani and Moreau. Steve Tambellini has a three-headed monster of defensive prospects in Chorney, Petry and Wild, a few completely unproven youtube superstars in Linus Omark and Rob Schremp, and a couple of big college centers in Nash and Vande Velde. Some combination created from that pool could have big number 11 skating in Edmonton next year and allow the next coach of the team to move Cogliano to the wing to replace Pisani or Moreau.

Montréal goes into the offseason without a center under contract. Koivu and Lang are unrestricted and Higgins and Plekanec are restricted. The only veterans on the team are all unrestricted, but Bob Gainey has the possibility of brute force of prospect pool to obtain him. Setting Hanzal in place at such a nice price would bring some serious stability to that team and free up a nice amount of cap space to play with. Hanzal matching the Bruins all year would be a matchup to look forward to.

Pittsburgh is another team that could use Hanzal's services. Shero should take a long, hard look at Hanzal, give his current predicament with the salary cap. Jordan Staal, Pittsburgh's third center is due to make $4 million per year beginning next year, meaning the Penguins are about to tie up $21.4 million per year in three centers. If the Pens could move Staal for a scoring wing, they've got pieces to move in the system and two veterans in Dupuis and Cooke. Shero could bring serious balance to the roster next year and the Pens would be strong from the starter's pistol.

The last option that makes sense is the New York Rangers. The Rangers head into the 09-10 season with 10 guys under contract for $42 million. They have six RFAs to sign and five other roster spots to fill. They need to move some salary and not take much back. The Rangers have Markus Naslud coming back next year with a cap hit of $4 million, but a salary of $3 million, a number that Phoenix can likely afford. He brings 25 goals to the table in a familiar conference and playing on a line with Shane Doan gives Phoenix a chance at a lower playoff spot next year should the rest of these kids take a step forward. The Rangers also have a small handful of upper shelf prospects [Del Zotto, Sanguinetti] to deal. They get cap relief and a great young center as Phoenix has their needs addressed.

These destinations seem to be the most logical for Hanzal, and that likely means that none of the four are correct. No matter where he ends up, someone is getting a tough-minutes center on the cheap who will likely have a cheap second contract in his RFA year. Martin Hanzal is cap-friendly, coach-friendly and opponent unfriendly, and Wayne Gretzky is going to struggle to get value out of this trade.