The Transcript of Kevin Lowe's Statement To The Media

Share All sharing options for: The Transcript of Kevin Lowe's Statement To The Media 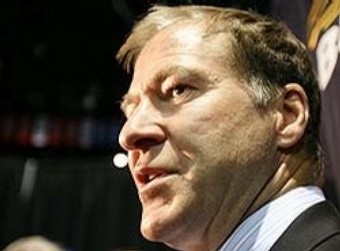 Kevin Lowe: "First of all I want to say that Daryl is extremely passionate and emotional about the game, and I think that’s why the fans are going to really love this guy. He said that he was extremely disappointed and somewhat frustrated by the fact that we’re in the middle of a playoff race and all of the discussion and the focus was on the future of our head coach. He found that rather odd, and even odder the fact that it was on the pregame show that he was listening to the discussion on the future of our head coach. He just wanted to suppress that once and for all. It’s as simple as that. He’s an emotional guy who is driving to the rink, listening to the radio show and heard all this discussion – he’s excited, as the fans are, to come to the game and he wants to hear discussions about the players and the playoff race and not about the future of the head coach. It’s exactly the way I described it – he was feeling a lot of emotion, just riding with his wife to the game and hearing all this talk about the future of the head coach. Quite frankly I kind of find it odd myself when there’s five games left in the season and that’s consuming the airwaves or the news waves, but I’m not going to tell you guys how to do your job. I can’t say that I disagree with him by any stretch, and I was feeling the same way. I just think that I’m explaining his position and obviously we’re disappointed in the game tonight, but that’s why I’m here, to discuss what just happened."

300 words, all together (maybe a little more with the word whiskers left in), and it can all really be boiled down to one sentence: Daryl Katz doesn't want Craig MacTavish's future discussed before the end of the season.

That's unfortunate for Daryl Katz, because tonight's press conference only served as fuel on the fire.

UPDATE: David Staples has a great post on the press conference over at Cult of Hockey, and he picked up on the same thing I did: Kevin Lowe refused to answer the question of whether Craig MacTavish would continue as the Oilers' head coach next season.

He also managed to get a written record of Dan Barnes' question and Kevin Lowe's answer down, which I'll include here:

"When he says, 'MacTavish is not going anywhere,' It's vague enough for us to ask, Is he (MacT) coming back in some other capacity?" said Barnes.
"Uh, I think you can probably ask that to Daryl at the end of the season, but I'm not going to delve into that," Lowe said.

I alluded to it in my "fuel on the fire" comment above, but I didn't expand the way Staples does: this press conference is the surest sign we've had that Craig MacTavish will not be coaching the Edmonton Oilers in 2009-10.