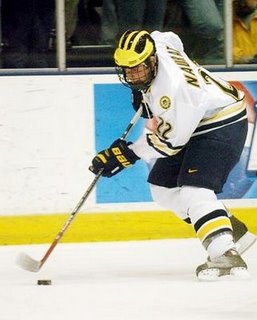 The Stockton Thunder have signed undrafted free agent forward Brandon Naurato out of the University of Michigan. He is expected to join the team for their Friday game against Las Vegas.

Naurato has had an unspectacular career for a very good team. Here are his statistics, courtesy of the University of Michigan's official website:

Fully one third of Naurato's NCAA goals were scored with the man advantage. He has a very good shot, as attested to by multiple scouting reports and a career 11.1 SH% in college hockey.

Naurato may help the Stockton Thunder in their playoff drive, but he's unlikely to ever get close to an NHL roster.