Since I Do So Little Writing...

Share All sharing options for: Since I Do So Little Writing... 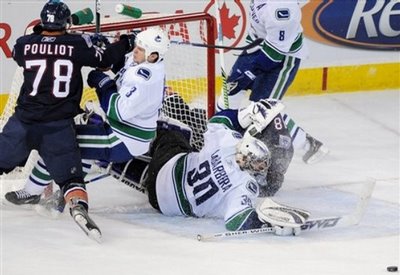 Starting today, I'll be doing my regular bits here and at Oilers Nation, but I'll also be doing some work for ON's newest site, Canucks Army. Today I did a little piece on Scott Arniel, the coach of the Manitoba Moose and the latest AHL Coach of the Year, as well as another bit on the perpetually underrated Sedin twins, and what they mean to the Canucks' season so far.

It makes a certain amount of sense - I live in B.C., my dad and most of my friends are Canucks fans, and I'm one of the few Oilers' guys out there who doesn't hate them.

I will still be doing Oilers' stuff, though - today at ON I did a bit on Linus Omark moving to the KHL and a breakdown of primary and secondary assists on the Oilers this season, sparked by some comments Robin Brownlee made about Tom Gilbert.

In any case, I just wanted to mention the new site quickly. Carry on.