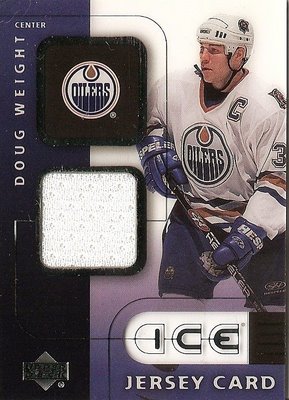 There was a time when Doug Weight was easily the most important player on the Edmonton Oilers. He was the team captain, and its leading scorer – in his final year with the club, Weight’s 90 points were 20 ahead of the next closest player (Ryan Smyth).

At one point, Weight was the best player on a pretty good first line – he played with Bill Guerin and Ryan Smyth, and the biggest concern the Oilers had was that they were only a one-line club offensively, as a series of failed experiments (Pat Falloon, Alexander Selivanov, Sergei Zholtok and Dan Cleary to name a few) came and went on the second line.

To close out his time in Edmonton, Doug Weight played between Cleary and Zholtok while Mike Comrie centred a soft-minutes scoring line with Anson Carter and Ryan Smyth.

In the summer of 2001, Weight was sent away to St. Louis for Jochen Hecht, Marty Reasoner, and prospect Jan Voracek. He was soon to be a free agent, and Edmonton couldn’t afford him. It was perhaps the definitive mark of the EIG’s time in control of the Oilers – many good players were sent away (including both of Weight’s best wingers, Guerin and Smyth) because of money issues.

One of the best things about Daryl Katz’s purchase of the team was the promise that there would be no more complaining about money; the owner was wealthy, and wanted to see a winning team. 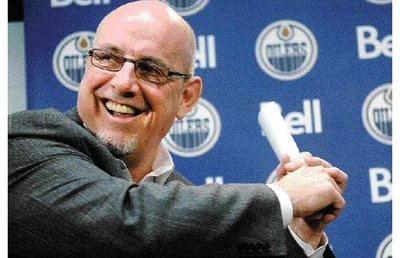 Even if that’s true, he’s not above pleading poverty to get his way, and maybe things haven’t changed so much since the days of the EIG – he even uses the same spokesman. Some quotes from Patrick Laforge in today’s Calgary Herals:

However, the drop in the value of the loonie took about a $6-million chunk out of the revenue stream, says Oilers president Patrick LaForge.

"That really bites into what you have for other things," says LaForge. "We've had to make adjustments on expenses elsewhere when we could."

A 6-million dollar drop (assuming we can believe the Oilers’ figures) is hardly chump change. On the other hand, the Herald sites a Forbes magazine report which pegged the team’s revenue as 85-million dollars and their expenses as 63.8 million dollars. That’s still quite the profit margin (a little over 21 million dollars). If we accept the Forbes figures and subtract Laforge’s 6 million, the Oilers still made a profit of about 15 million dollars.

LaForge says not making the playoffs won't break the team, but a couple home games would've bumped up the bottom line. In the longer term, the team's financial fortunes seem to be tied to hopes of building a new arena…

"We have the smallest arena in the NHL. We are the least equipped to serve our customers and in-house clients," says LaForge. "We want an arena that's bigger and better with more things to do."

Maybe we’re past the days of players leaving town because the Oilers can’t afford to pay them. But we certainly aren’t past the days of Patrick Laforge (undoubtedly under ownership’s direction) citing impending financial ruin to squeeze whatever he can out of the fans and out of the city.