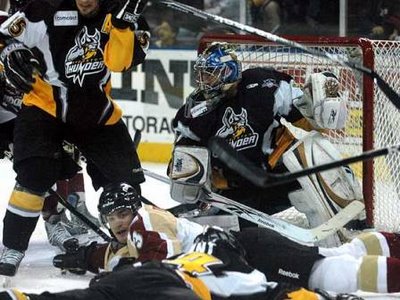 The Stockton Thunder played their first playoff game last night. They're the only team under the Oilers' umbrella to make the post-season, with both Springfield and Edmonton out of the picture, and it doesn't seem likely that they'll make it out of the first round.

Halfway through last night's game, Stockton lost their starting goaltender, Andrew Perugini. It's a right leg injury, and at this point it is uncertain how sever the injury is, but Perugini could not finish the game and will be re-evaluated today.

Perugini has easily been the best goaltender on Stockton's roster; here's a quick comparison between him and backup Bryan Pitton:

Last night, Perugini allowed 2 goals against on 19 shots. Pitton allowed 2 in the 10 shots he faced in relief. There's a big difference in their relative levels of ability, and it may cost Stockton a chance to advance in the playoffs.

Getting past the comparatively minor issue of Stockton's post-season, the real question is how serious this injury is and what sort of repercussions it will have on Perugini's career.