People Will Never Accept Advanced Statistics (Or: You Can't Win If You Don't Buy A Ticket)

Share All sharing options for: People Will Never Accept Advanced Statistics (Or: You Can't Win If You Don't Buy A Ticket) 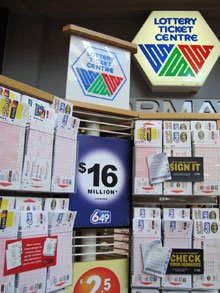 People as a whole will never accept advanced statistics because they are bad at math. The MSN website has an article up on it's main page right now talking about the odds of winning the lottery; here's the relevant portion:

Lotteries are often used as examples of innumeracy or financial illiteracy because it's common to misunderstand the probabilities on which the games are based...

We can digest the big numbers involved in the probabilities of winning the Lotto 6-49 in the very same way. The nice folks at the lottery assure us that the odds that any particular number will be drawn is one in 13,983,816. To state that same statistic in another way, any number may be expected to win 0.000007 per cent of the time.

So the next time you buy a 6-49 lottery ticket, you can be 99.999993 per cent confident that you will not win the big jackpot. Now, go ahead and compare that to your conviction about, well, pretty much anything else. (For instance, based on the most recent Transport Canada stats, on average you're more than four times more likely than that to die in a motor vehicle...today.)

Talk about buying with confidence! There may not be another product about which you can be so certain. You are virtually guaranteed not to win. In fact, you may as well just tear up your lottery ticket right in front of the clerk who sold it to you, and cavalierly toss the scraps in the trash.

And yet, people continue to buy lottery tickets.

Now, I understand that there are real and identifiable problems with advanced statistics right now. But the simple fact of the matter is that people as a whole will never accept them, even if they are proven to work 90% or 95% of the time. It's something that I need to remember, something that anyone interested in pushing this viewpoint needs to remember.

Keep in mind that I'm not attacking people who don't accept these numbers now - because they're a long ways from being proven. My point is that no matter how well grounded the argument eventually becomes, large portions of society will not accept it, because some people simply won't have the necessary faculties to process the information. It reflects more on them than on the argument itself.

I don't really care how arrogant that sounds because it is true. In any society where lotteries such as 6-49 can make tremendous profits, there are just too many people who aren't capable of comprehending basic mathematics.