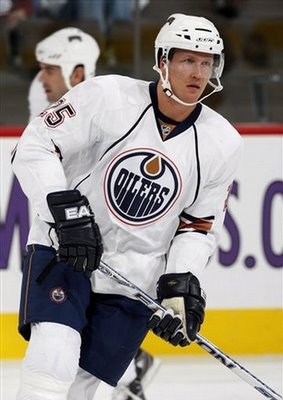 This is Joni Pitkanen. A year ago today, I wrote my first post on this blog, a projection for Rob Schremp. Later that same day I revisited Kevin Lowe's work from the summer of 2000 and guessed that when Pitkanen was traded it would be similar to the Roman Hamrlik deal; an established player leaving town for youngsters.

Not so much, as it turned out. The slow return to grace that I envisioned for the team never transpired; instead, Kevin Lowe made a serious of moves designed to pay immediate dividends. If he'd done a more thorough job of it, we likely wouldn't be watching the final hours of the Oilers' season (and likely Craig MacTavish's time with the team) dwindling away.

Back to Pitkanen. I wrote about him a lot that summer; his name consistently popped up in rumours until he was finally dealt, and as a result I've ended up talking about him (on this site) this past year more than any other individual player. Here's the list of subjects I've considered, based on post tags:

A lot has happened since I started this blog; I've started writing for OilersNation and let this place lapse into inactivity, and only recently restored it to it's previous level of volume.

I'd like at this time to share some of the analytical information I've collected on this site over the past year. It's an incomplete picture, because I didn't start tracking visitors until July and then later, when I switched the format of the site over to it's present form I lost tracking information for almost two months. Still, there's some fun stuff to see:

- some 20,000 or so unique visitors
- 100,000 page views
- visitors from more than 60 different countries and every continent save Antarctica; I'd never imagined that people in places like Tripoli, Surco, Melbourne, Kuala Lumpur, Seoul, Kuwait, Athens, Istanbul, Paris or Zurich would be reading my writing. It's humbling.

I'd like to thank everybody who has helped bring traffic to this site; like most Oilers bloggers out there I owe a lot of thanks to Lowetide, not only for directing people this way but for introducing me to blogging and an entirely different way of seeing the game. I'm not going to thank everyone individually but many of them are found on the blogroll to the right, and my current state of knowledge would be much less if not for their insightful writing.

As for the next year, I'm not going to get into details but I think there are still some surprises to come.