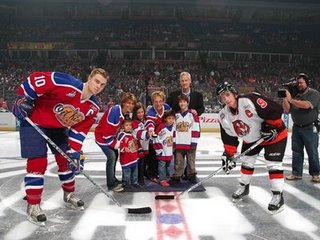 With seasons over or nearing their conclusion for junior and college teams across North America, professional teams are signing undrafted prospects to tryout contracts. Yesterday, the Stockton Thunder signed Brandon Naurato, and today the Edmonton Oilers have signed Jeff Lee (far left) of the Oil Kings to an amateur tryout.

Lee has had an interesting, albeit unspectacular amateur career. Here are his numbers:

Lee played for a very bad Sherwood Park team in 2005-06; his 33 points represented just under a quarter of the team’s total offense. He moved on to the University of Alaska-Fairbanks in 2006-07. That team was outscored 128 to 100, and Lee seems to have been a bit player on the team. He came over to the WHL just two games into the next season. In his first season he was just one more middling player on a bad team.

This past year, Lee had a very decent season on a lousy team; his +2 led all players on the Oil Kings (the team was outscored 191 to 252) and he tied for the lead in team scoring.

In the grand scheme of things though, Jeff Lee turns 21 in June and has but one decent junior/college season to his credit, and even in that season he wasn’t a dominant scorer. On the other hand, he should at least be comfortable in Springfield - he's never played for a good team.