"Power forward" is a term that is thrown about by the average fan and hockey media types alike. The same conversation occurs repeatedly, whether it's Joe Sixpack and John Abusivehockeydad at the bar, or Gord Bobblehead and Craig Flappinglips during an intermission segment on national hockey broadcast of the week.

"This team needs a power forward! Someone that can hit people and put the puck in the net!"
"Yeah! They just need a banger that likes to hit!"
"And score the tough goals!" 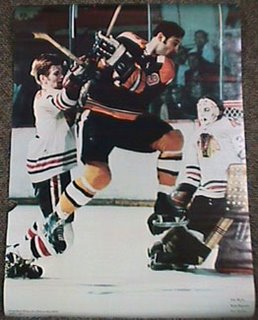 Off they go discussing days gone bye, wishing that their team could only get their heads straight and just trade for the next Cam Neely, sign the next Rick Tocchet or draft the next Johnny Bucyk. It's easy, you see, just find a big guy that can skate, score, and hit, put him on your favorite team's first line and Voila!, Stanley Cup. Names like Keith Tkachuk, Shane Doan and Erik Cole are thrown about, heads nod in agreement and everyone goes away drunk and happy. A POWER FORWARD, that's all we need! Power Forward. Power forward. power forward. [FADE]

A recent discussion thread, coupled with one of those intermission segments started me on a search for the Mythical Beast, the Power Forward. Perhaps this is an exercise akin to charging at windmills, but for as many words are wasted on the topic, I think it deserves a once-over. Besides, I have no Sancho Panza to stop me. My quest was confined to the parameters that Joe and John use to describe the power forward, namely hits and goals. Those parameters have an obvious flaw -- that hits are completely subjective and usually inflated, but let's assume league-wide inflation for the time being. I threw the question out to a number of people that I know and the near-unanimous answer was that a power forward needs to score at least 25 goals a year and accumulate hits. I asked if one hit per game were enough and I was rebuffed. Certainly not - anyone can get one hit per game. Two hits per game limits the search to about 35 players total, so I bumped that number down to 1.5 hits per game, used .3 GPG as the minimum standard for scoring which approximates 25 goals and set the minimum games played at 60.

Over the last three years, there are two players that qualify as power forwards -- Alexander Ovechkin and Shane Doan. The beast, though gravely endangered, exists. .5% of all NHL forwards can truly be considered power forwards in this sense. Perhaps asking these players to perform at this high of a level for three straight years is too much, given the beating that they must take on a game-by-game basis. What if we allow for a down year, or allow for injuries to waste a year? How many guys make the list for two of three years? Eight. Brown, Cole, Doan, Getzlaf, Kunitz, Malone, Richards and Ovechkin. 2% of NHL forwards are sometimes power forwards. Brendan Morrow's injuries prevented him from making either category on this list and Erik Cole's misery in Edmonton kept him from being the third mythical beast with Ovechkin and Doan.

What Joe and John fail to take into account in their rantings from their barstool is that power and physical play does not necessarily equal hitting. Noticeably absent from the list is the supposedly-prototypical power forward, Jarome Iginla. He doesn't rack up enough hits to qualify. Would Joe and John consider him a power forward? I believe that they would. There are others in this mold - physical players that don't create big hit stats - that would be considered power forwards by opposing defensemen, but without the hits, the average fan and bobblehead doesn't see it that way unless they've been told repeatedly how "big and strong" these players are [see: Iginla, Jarome; Thornton, Joe].

What can we take away from this?

A roster fix via the vaunted "power forward" is nearly impossible. The players in this mold are extremely rare and the ones that do actually exist come with a heavy cap number. Their trade cost is just about priceless. Beyond that, the guys that fit this mold aren't necessarily dynamic scorers - outside of Ovechkin and Doan, there were 28 "power forward" seasons by 22 different players in this period. Only 6 of those players broke the 30 goal mark and they averaged 25 goals per season. I concede that it is a possibility that this type of player has fantastic underliers, but they don't deliver on the the large amount of traditional stats hype.