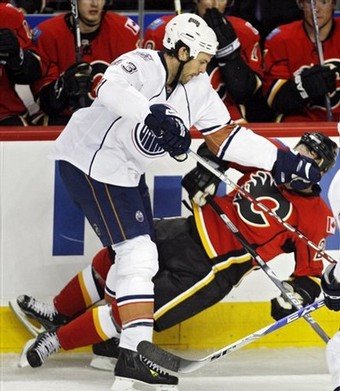 Jason Strudwick is the Oilers' nominee for the Bill Masterton Trophy. Strudwick has more than 500 career games, but he's never played more than the 68 games that he's played this season.

It's a nice gesture for a hard-working player whose chief calling cards are character, versatility, and a physical game. I'm rather surprised that Steve MacIntyre didn't get the nod; he suffered a serious injury this season and it was only two years ago that he was playing in the UHL. He's bounced around in leagues I've barely even heard of, and he's done it for years.

Dwayne Roloson was the other obvious candidate, recovering from losing his starting job last year to put together one of the finest seasons a goaltender his age has ever had. Still, he can take some consolation in the fact that he's certainly earned another contract from somebody - likely the Oilers.