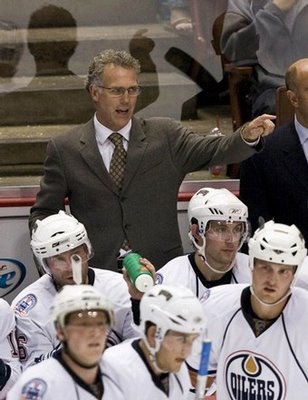 The way I understand it, there are still people out there who doubt Lowetide's frequesnt assertion that Criag MacTavish will easily get another NHL job once his time in Edmonton officially ends. Familiarity breeds contempt, I suppose, so perhaps that's the reason why many Oilers' fans don't give him the credit he's deserved after his work with many Oilers teams - the group last year certianly over-achieved, like others during his time here.

The respect that the hockey world as a whole has for MacTavish was reinforced by a Sun Media report today:

At the same time Craig MacTavish is contemplating turning in his resignation as coach of the Edmonton Oilers, Sun Media has learned he is about to be asked to consider becoming head coach of Team Canada at the world hockey championship in Switzerland.

"We have him on our short list," Hockey Canada president Bob Nicholson said. "Craig certainly has a shot. He's definitely in the mix."

According to the report, that short list consists of MacTavish, Lindy Ruff in Buffalo and Barry Trotz in Nashville. That isn't a bad group to be counted among. 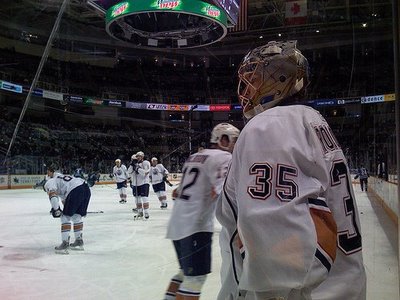 As for Dwayne Roloson, we've been reading things over the last month that indicated the Oilers were strongly leaning towards bringing him back for at least another season.

Jim Matheson's column today quotes Roloson as saying that he felt he could play "another three or four years," and further suggests that a two-year contract would be a good length.

Even more frightening, Matheson says that those two years would give the Oilers "time to see if Deslauriers can take over." I hope that Matheson's speculating here, but given his contacts within the organization it is impossible to be sure.

1) Do everything possible to get Roloson back on one-year contracts only.
2) Get him a backup that the coach can have confidence in.

I actually really like Jeff Deslauriers; he's been badly mismanaged and suffered through some awful developmental years for a team that didn't make development a priority. But the bottom line is that the Oilers cannot afford to have a question mark in net behind their 40-year old goaltender. It's too big of a gamble.

So I'd argue that if Roloson is coming back, Deslauriers should be sent on his way and a veteran option (from the Jason Labarbera class) should be brought in to serve as a 1B goaltender.