Share All sharing options for: Just Play The Kids... 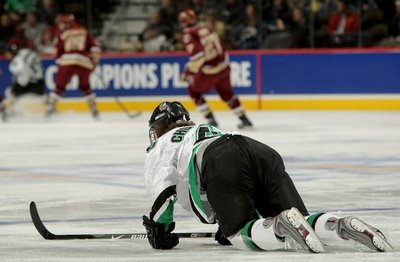 Taylor Chorney got his NHL debut in the second-last game of the season, and he played again last night. He had the worst plus/minus on the Springfield Falcons at -29, and it seemed obvious he wasn't ready for the NHL. With the season already over, the Oilers decided to give him a quick look.

The worst plus/minus mark on the Oilers is Patrick O'Sullivan's -7. The worst mark by a defenseman is Ladislav Smid's -6. In two games, Taylor Chorney moved himself almost to the bottom of the pile. It's a small sample, but it jives with his AHL numbers, and shows the difficulties most prospects have adapting to the professional game.

Jeff Deslauriers also got shelled last night, after playing very well the night before. Here are his numbers on the season:

That shouldn't be a surprise; he put up a .906 SV% in his AHL conditioning stint and in his best year (last season) he put up a .912 SV% in the AHL. After his good game against Calgary in game #81 of the season, I read in a few different places that Deslauriers should get 50% of the starts next season.

There's a simple rule that I like to follow when making decisions like this: prospects who are average or below average in the AHL very rarely turn out to be immediately good in the NHL, no matter how nice it would be if they did. It amazes me how few people understand that.