Cutting The Captain Some Slack

Share All sharing options for: Cutting The Captain Some Slack 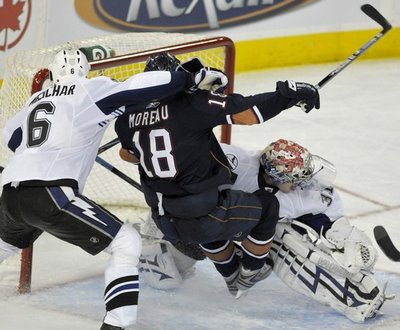 In Joanne Ireland's column today, she reveals something about Ethan Moreau that hasn't been common knowledge - he's been playing with a broken hand since December (h/t to Bringing Back The Glory).

Moreau's had an up and down season; many (including myself) have been harshly critical of the sheer volume of senseless penalties he takes. This is fair criticism. He's also been outchanced at even-strength, has an ugly Corsi number (along with the usually reliable Pisani) and has said some funny things for a team captain.

On the other hand, he has been playing tough competition all season long, often in unfavourable circumstances and with underqualified linemates. He's also been a consistently physical presence on a team that occasionally lacks that quality.

So, while I tend to agree with Shepso at Bringing Back the Glory that it's incredibly frustrating to watch an injured player put into tough situations night in and night out while useful parts in Dustin Penner, Marc Pouliot, Kyle Brodziak and Robert Nilsson are relegated to lesser roles or the sidelines, there's a positive upside to all this - namely, that Ethan Moreau's performance could plausibly improve by a significant margin next season.

And if that improvement can turn the captain into a physical player who holds his own at even strength against tough opposition, he could be a very useful part of this team going forward. If the amount of attention his reckless penalties have gotten this season motivates him to change his ways (and to my eye he did improve in this area down the stretch), he may even be a player that I applaud next season.