Share All sharing options for: Canada 6, Belarus 1 -- a good start 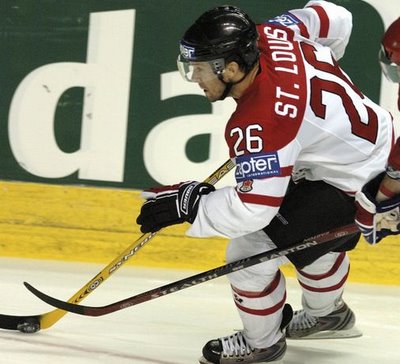 Team Canada 2009 took to the ice earlier today in Kloten, Switzerland. The club had no opportunity for exhibition games, but the opening preliminary round match against Belarus was pretty much that. The squad, ably coached by Lindy Ruff, Barry Trotz and Dave Tippett, played a pretty solid all-around game, all things considered.

The success formula for Canada or pretty much any club at this tourney is to build cohesiveness through the early rounds and peak for the medal round. The early games are generally against inferior opponents and tend to be sloppy affairs. That was less true than usual today, as Canada jumped out to an early 2-0 lead courtesy a pair of goals by Steven Stamkos, and held that modest lead through 40 minutes before exploding for 4 goals in the third to put it away.

While at first glance the current squad appears underwhelming, Canada's depth is such that we always have a respectable team with a fighing chance of taking home the gold (5 of the last 15). I see no reason why the current group shouldn't aspire to that, especially with a couple of spots held open for reinforcements.

Today's lines were as follows:

1. D. Roy - J. Spezza - D. Heatley
For obvious reasons the coaches stuck with pairs of teammates when possible. The Ottawa pair showed their chemistry in the third when they combined for three goals, with each finishing the night +3 with 3 points. Best of the lot was the one Spezza literally stuck in the roof of the net after Heatley froze the defence with a fake shot before slipping it through. Roy, playing out of position, did OK, but I have half a mind he's just a placeholder for Rick Nash if he's healthy enough to come over.

2. M. St.Louis - S. Stamkos - S. Doan
Stamkos turned the corner on his rookie season around the time St.Louis was put on his line, noching 17 goals in his last 28 games after just 6 in his first 51. According to HockeyAnalysis.com the pair played 230 minutes together, scoring at a rate of 1.474 GF per 20 minutes. When apart Stamkos recorded just 0.540 GF/20. We saw that chemistry seconds into their first shift when Stamkos converted MSL's bullet feed across the goal mouth into the early lead. Doan provides a perfect complement with his gritty two-way play and broad international experience. 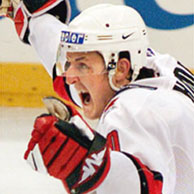 Finally pencilled in at what some would call his "natural" spot of 3C, Horcoff nonetheless led all Canadian fowards with 18:20 TOI, almost 3 minutes more than the next guy, his linemate Lombardi. Horc was first choice in the long 3v5 Canada killed in the second and a major contributor to the PK unit generally. Like Roy, Lombardi is a centre forced out to the wing. Wild card here is Upshall, who lit it up in Phoenix after a mostly desultory year in Philadelphia.

4. J. Neal - M. Fisher - C. Armstrong
Fantastic looking crash line, three guys with no little skill that skate hard both ways carrying a chip on their shoulder. Fisher absolutely crushed one poor Belarussian with a wicked shoulder check. The line also chipped in with a goal on a fine three-way passing play. These guys are going to be fun to watch.

1. D. Hamhuis - S. Weber
Talented young pairing with buckets of international experience. They look like a natural pair with a righty and a lefty but mostly play with separate partners in Nashville (Hamhuis-Zanon; Weber-Suter). Still seemed to know each other pretty well, playing a solid, assertive and coordinated game.
2. C. Phillips - D. Doughty
Although they had couple of rocky moments, the veteran shutdown man Phillips would seem to be a perfect complement for the talented Doughty, one of three teenaged Canadians who was picked at last June's draft. Doughty combined with his fellow top pick Stamkos on a beauty give-and-go that resulted in the game winning goal.
3. I. White - L. Schenn
One wouldn't expect this to be a regular pair in the NHL for a couple of reasons, but to my surprise the two righties played over 266 minutes together this year. Truth be told, I'm a little baffled as to White's presence on the team -- he's the one guy in the group who doesn't appear to have top pairing potential -- but he's a mobile puck mover whose defensive game needs a little less work than it used to. Schenn is an absolute beauty of a young shutdown defender who accomplished the difficult feat of continuing to impress me this season despite playing for the Leafs.

G - D. Roloson
Roli was in fine fettle, even hit a fungo midway through the game. Got away with one puckhandling blunder late in the first when he stumbled into the net and knocked it loose just as Grabovski was depositing the gift, and even though it was a defensive player responsible IIHF rules disallowed the goal. In the second Roloson made a sensational two-pad stack on a fine rush by Grabovski to hold the lead at 2-0, but later bled a fat rebound to the same Grabovski -- by FAR the best Belarussian -- to lose his shutout late in the third. Looked rested and focussed.

Josh Harding backed up this game, but with Chris Mason en route we probably won't get a look at the Wild young backup who many favour as a possible answer in the Oilers' crease. Or maybe Harding will get a token game against Canada's next opponent, overmatched Hungary playing in the A Pool for the first time since 1939. That'll be on the tube Sunday afternoon for those who want to see different coloured unis and a probable butt-kicking. I'll be out of town for that one, but otherwise will be following Team Canada's progress here on Oil Droppings, including live blogs for the big games in the medal round. Those of you who are following the tournament (or who can't due to its often-inconvenient game times), do drop in!