Kent Tekulve was an underrated workhorse. Nicknamed "The Rubber Band Man" because he was tall [6'4"] and skinny [170 pounds] with a fun-to-watch submarine delivery and had a arm that never quit. His goofy looks and transition lenses hid a fantastic all-around pitcher willing to take whatever role asked of him. He began his career supporting longtime closer Dave Giusti but was promoted in 1976 as Giusti began to break down. He established himself in the stretch run that year and was primed to become the regular bullpen man. The following year the Pirates traded for Terry Forster and Goose Gossage and Teke was again a setup man, this time to Gossage and Forster. He was great in long-relief and went 10-1 with a 3.06 ERA and seven saves.

Gossage was gone to the Yankees in free agency and Tekulve was now the man. He had 31 saves in 1978 and in 1979 gained national recognition with 31 saves and a World Series win. He had 90 appearances in both 1978 and 1979. Teke was brilliant in the 1979 World Series, where he saved three games and finally got the recognition he deserved. In the 1979 season, in the ninth inning of a game against the Giants, Darrell Evans was coming to the plate with Teke on the mound and two outs. Chuck Tanner had lefty Grant Jackson available, but the right-handed hitting Mike Ivie was on deck and Tanner wanted Tekulve to face him. Tanner pulled the pitcher switch and put Tekulve in left-field while Jackson faced Evans, figuring that a dead-pull hitter like Evans meant Tekulve was safe in left. The result? A fly ball to left field, and the versatile Tekulve had no problem hauling in the putout to end the game.

As he advanced in years, he was moved back into situational relief without complaint and continued to work tirelessly in every role. Teke appeared in 90 games three times, a baseball record. He even managed to appear in 90 games at age forty. The man ended his career with 1,050 appearances and the adoration of Pittsburgh Pirate fans that continues to this day.

I bring up Kent Tekulve because the Pittsburgh Penguins have their own Teke today. Tyler Kennedy is an underrated workhorse, playing multiple roles on multiple lines at multiple positions that just gets results no matter where he goes. Kennedy was selected by the Penguins in the fourth round of the 2004 NHL Entry Draft with the 99th overall pick. Kennedy is the physical opposite of Tekulve - 5'10", 183 pounds, but he's never had flash to his game and from the time he entered the organization, words like "Sparkplug" and "Feisty" followed him. 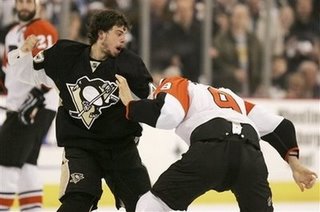 Thus far in the 08-09 season, Kennedy has played RW1, RW2, RW3, RW4, LW1, LW2, been suspended and a healthy scratch. His boxcars aren't much to look at, but I imagine they might look a bit better if he were able to play in the same position for awhile. In 55 games played last year, he had 10G 9A and was a +2. In 59 games this year, he's 13G 15A and a +7. He's got a couple of fighting majors in his career and is not afraid to throw his body into anyone. Not bad for a guy that could be the first line right wing tonight and the guy holding the T-Shirt gun tomorrow.

However, the reason that Kennedy is the new Teke exists in the murky world of the underliers. A check of his Desjardins numbers is interesting: he's playing the second toughest minutes [Qualcomp .03] at right wing for the Penguins and he's doing it with the worst teammates of any Penguins regular [Qualteam -.22]. Looking at forwards that have been on the team for the entire year, he's got the only positive Corsi/60 [3.6]. He's outscoring a bit too. Fourth on the team among regular forwards in goal differential, and in the range of second place behind the superhuman Evgeni Malkin, outscoring by .2 goals per game.

About two weeks before Michel Therrien was fired, a good friend of mine and I were discussing the Pens' problems, and beyond the obvious issues of Therrien throwing Max Talbot [#25] to the wolves and Talbot being eaten alive, we both noted how Kennedy was being underutilized. I mentioned that the line of Matt Cooke, Jordan Staal and Tyler Kennedy seemed to get things done. I checked Vic's site.

A quick look at the day before Therrien was fired, after the Toronto game with Vic's shift compiler [Kennedy is #48, Cooke is #24, Staal is #11, that combined line is #99] On a team with a goal differential of +3, Kennedy was +5. On a team with a Corsi of -381, Kennedy had a +7 and remember his from above [Qualteam -.22], so he is outperforming his team. Our intuition about the 24-11-48 line was also correct -- Slightly outscoring in limited time, outshooting, outblocking and putting up a fantastic Corsi. That was a line that should stay together, Therien's blender be damned! Enter Dan Bylsma. In the seventeen games since he's been coach, 24-11-48 have been together thirteen times. They're still slightly outscoring, outshooting and putting up the nice Corsi, more importantly for the Pens - they are a regular line. Vic should check his IP logs to see if someone from the Mellon Arena is running queries. Individually, Kennedy's numbers are still quite good, and he's doing all the right things. The whole season data for Kennedy is just really nice as well. What about Vic's new toy, the Zoneshift?

Kennedy has started in his own end 42 [second among Pens wingers to Matt Cooke] times more than he has started in the offensive zone [201-159]. He's ended in the offensive zone 3 more times than his own zone [192-189], for a Zoneshift of +45, second overall on the Penguins behind Jordan Staal and first among wingers. This is a guy that outperforms his teammates, however does he make them better?

To try and answer that, let's look at the numbers from Stats.HockeyAnalysis.com on Kennedy. His most common linemates are now Staal and Cooke since Bylsma has played them together for about 160 minutes of even strength time since February 16th. Before that stretch however, we see that Staal was his most common linemate and a group of Satan, Crosby, Talbot, Dupuis and Cooke in some combination were common to Kennedy for the first two-thirds of the season.

Every player that he's seen regular time with this year is worse defensively without him. Six Penguins are a half of a goal per game worse without Teke.

Last year, the Penguins traded away a feisty young fireplug of a right wing in a huge package to land a couple of months of Marian Hossa. Many Pens fans were notably upset that Colby Armstrong was part of that deal, believing that his blend of skills and sandpaper weren't easy to replace. I'm not sure how many of them even considered that Teke would be able to replace them as soon as Armstrong was out the door. Barring injury, given his age and his game, it's not a stretch to see the new Teke as a 20-25 goal man on the right wing for stretch of five to seven seasons. Someone in the Penguins scouting department deserves some serious praise for this find -- Teke looks like a guy that is going to get 750 games in this league. Players like Kennedy - those that get the puck going in the right direction and make their teammates better while staying completely under the radar aren't easy to find, and the Penguins would be best served to buy a couple of UFA years as soon as possible to keep Kennedy around for awhile.