Stuck In The Middle With Cogs

Share All sharing options for: Stuck In The Middle With Cogs 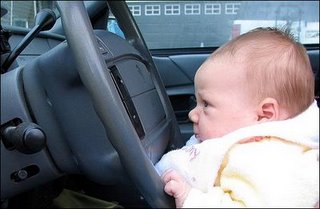 The inevitable conclusion to this photograph is a car wreck. The inevitable conclusion to Andrew Cogliano staying in the faceoff circle is...yes, a car wreck. Andrew Cogliano is a young player with a partially-beautiful game which includes blazing speed, decent hands, a bit of a scorer's touch and all of the hustle in the world. The reason that his game is only partially beautiful is that there exists a large deficiency in his game and that is faceoffs.

This year, Andrew is 224W 375L for a dreadful 37.4%. That follows last year's 39.5% on the 542 faceoffs that he took. For the 'saw him bad' club, Cogliano has lost two faceoffs in the last two games that led directly to goals. Both of these came after icing calls on the Oilers. Why the Oilers are icing the puck with Cogliano on the ice is beyond me.

Some will argue that Cogliano needs to take his lumps on the dot and learn the craft -- he'll get better with time. A slight downward year-over-year trend seems in indicate that the learning curve will be a long one. Besides that, with ten games to go, and a team guarantee of the playoffs, the time for learning, one would think, is over. Let's investigate.

The above is a list of the worst eleven qualifying faceoff men in the NHL since the year 2000. Cogliano appears twice in two seasons, and obviously is on pace to have the worst season on the dot in the last eight years. More interesting are the other names on that list and what's become of them. There are the guys out of position: Oleg Kvasha, Shane Doan and Ryan Malone were all wingers that were attempting to change positions or were forced into the circle by personnel issues. There are the centers that never were: Milan Kraft, the current titleholder, went sent out after a year in which his counting numbers were okay, but he was overmatched. He's never made it back. Patrik Berglund is a rookie that is as overmatched in the circle as Cogliano. Viktor Kozlov was moved to the wing, partly because he couldn't handle faceoffs. Tim Connolly, seven years later, is still only 44% on the dot. Evgeni Malkin, in his third year, up to only 42%, though a physical specimen and one would think that is positioned well to eventually get it. That leaves us Matt Stajan. It's taken him five years, but he's developed into a reliable guy in the circle.

As for learning, Cogliano's numbers are down year over year - statistical blip? Sure. But what's more concerning to me as far as both playoff hopes and development go is that he's getting worse, far worse, in a key time. In the last thirteen games, he's 26% -- 39W 110L. In the last seven games, he's 20% -- 14W 57L. To the watching eye, he's getting beat cleanly too, there are no scrums, in fact, his "scrum" number in the last seven games is 9%.

This doesn't bode well for Cogliano, especially considering the Edmonton Oilers depth chart. Horcoff is locked in long-term and Gagner is coming along. Brodziak is a bottom six favorite. Riley Nash is a couple of years away. Cogliano is going to be stuck getting extremely protected bottom six minutes for a long-time if things don't change.

Speaking of protected minutes, let's delve into that a bit. Using Vic's zoneshift metric, we see that Cogliano's shift start value is -57, meaning that he's started in the offensive zone 57 more times than he has in the defensive zone. Cogliano is the most protected Oiler - Brodziak's value is 147, Horcoff's value is 141, and Gagner's is -40. How long will the organization continue to employ a center that needs to take the softest shifts available and not really crush those shifts? Looking a bit deeper than that and using Vic's shiftend numbers, Cogliano's value is -34, which means his total zoneshift is -23. Of the 114 qualifying faceoff centers, that ranks 92nd. The puck isn't moving the right way when he's on the ice. As we've previously discussed, his linemates may be the issue, but these two peeks at Cogliano shows that Andrew the center is not where he should be. It's got to be difficult to get the puck moving in the right direction when the lack of ability to win a faceoff prevents you from ever having the puck on your stick. Of the bottom twenty faceoff men in the league, only Jochen Hecht was starting in his own end more than the offensive end but Dominic Moore was acquired to bolster that hole in the roster.

There are smaller things at play here too -- he can't be used on the penalty kill if he has no chance of winning a faceoff. Few coaches are going to employ a penalty killer with that background, and of the bottom twenty faceoff centers in the league right now, only Dustin Boyd and Dave Bolland get any penalty kill time. Jochen Hecht was getting time, but it's been taken by Moore.

There are positives. His CORSI is higher than his common linemates, his scoring touch remains. He's young and still has development time, though it runs out with his entry-level contract expiring at the end of next year.

The long-term solution is moving Cogliano to the wing. Given the current depth chart and the coming Riley Nash, Cogliano has no place in the middle. He would, however, be a low-cost alternative to bringing in a $4+ million scorer, given his scoring touch and underliers. As I mentioned, he has one year of development time left, and it's best to use that on the wing. The organization needs scoring wingers and has a year to turn Cogliano into one of those.

The short-term solution is Marc Pouliot. Pouliot is 98W 104L for 48.5% thus far this year, has played well with Fernando Pisani in the past and as the coach says, has no natural position, so he can slide to either wing when the faceoff is over. In fact, before his recent and completely random trip to the press box Pouliot was taking faceoffs for Sam Gagner, then moving to wing during the course of play and handling the role nicely.

Random stuff: Cogliano needs to go 42% for the rest of the season to avoid becoming the worst single-season faceoff man of the decade. Considering his last month - I think he's got the inside track to the title.

Ethan Moreau is 11W 24L and 31.4% for the season, so he's the last guy on the team that should be waiving anyone out of the faceoff circle.