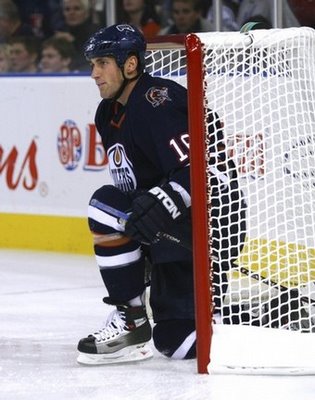 Remember Jarret Stoll? Anointed as a future captain by many fans after a great performance in 2005-06, for a while it looked like injuries might have derailed his career.

He was traded to Los Angeles after a disastrous 2007-08 season, along with Matt Greene in exchange for Lubomir Visnovsky. It was a great trade by Kevin Lowe, and a nice way to end his time as a general manager.

In any case, Stoll's having a nice season in Los Angeles. Let's compare his numbers this year to his numbers last year:

It would certainly appear that Stoll's having a much better season than last year, but I don't think the difference is as dramatic as it looks at first glance.

Behind the Net ranks the quality of opposition a player sees and the quality of teammate he plays with using a weighted plus/minus statistic. Here are the numbers for Stoll, year over year:

Roughly, this means that Stoll went from playing against the opposition's best line with third-line teammates to playing the opposition's third-best line with second-line teammates. That's a big deal, and at this point I think it's safe to say that Stoll is far more likely to meet expectations playing as a soft-minutes scorer than a tough-minutes checker.