A Quick Thought On Goaltenders Under Contract

Share All sharing options for: A Quick Thought On Goaltenders Under Contract 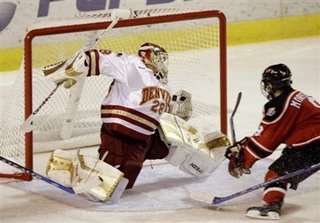 This picture is of Glenn Fisher from his days at the University of Denver. He was an unremarkable NCAA goaltender except in his final season where he posted a .919 SV% and earned a professional contract.

Fisher is also one of three goaltenders connected to the Oilers' organization currently playing in the ECHL. Here are the three, and their stats lines for this season:

I still think Perugini's a better prospect than Fisher based on age and context (Fisher's numbers come on a very defensively sound Las Vegas Wranglers team) but Fisher seems to have bounced back nicely from a miserable 2007-08.

The one point that I think needs emphasis is this: of the three, Bryan Pitton is the only one who has an NHL contract.