Share All sharing options for: Quick, Somebody Tell Robert The Bad News 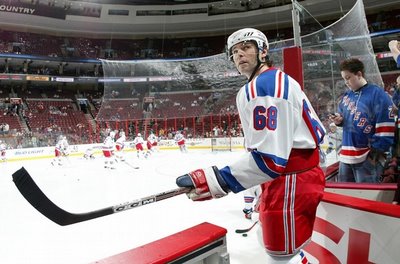 That fellow who covers the Edmonton Oilers from home, David Staples, was right when he said that the Edmonton Oilers were interested in Jaromir Jagr. Turns out that the Oilers and Avangard Omsk negotiated a deal that would see Jagr come back to the NHL if Omsk failed to make the playoffs or were swept in the first round.

Somebody probably ought to let Rob Tychowski know - it seems he was under some illusions about the deal:

[David Staples] is the same blogger who just had Jaromir Jagr joining the Oilers for the stretch drive, even though it contravened the rules of the NHL, CBA and Russia's Kontinental Hockey League.