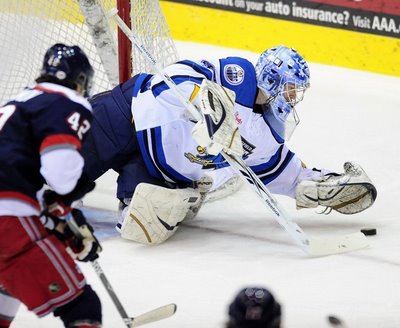 The picture here is of Devan Dubnyk, the Edmonton Oilers #1 ranked goaltending prospect and their first selection of the 2004 NHL Entry Draft. He's had a decent season on a struggling AHL franchise, and is often mentioned as one of the few bright spots of the Falcon's dismal season.

Here are his numbers on the season:

For a guy who has lost more than twice as many games as he's won, those are incredible numbers, but there's just one problem - they aren't quite as good as career AHL journeyman/NHL backup Dany Sabourin. Here are Sabourin's numbers since being re-assigned:

That's fairly close, at first blush. What's really alarming is that Dubnyk has crashed and burned since Sabourin has been assigned to Springfield. His numbers over that span:

In point of fact, Dubnyk's collapse has masked an otherwise decent turnaround from the rest of the roster since Rob Daum replaced Jeff Truitt in mid-February. It could be something as simple as a cold streak for Dubnyk and a hot streak for Sabourin, so now isn't the time to write Dubnyk off, but it is worth noting. It's a real cause for concern that Dubnyk's been so soundly outplayed by a player like Sabourin, who has been decent in NHL stints but has never really excelled at that level. It rather strongly implies that Dubnyk may be further away from NHL duty than is commonly expected.