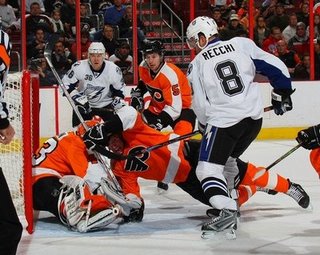 Jim Matheson tosses out some names that the Oilers may be looking at in his column today. Matheson's obviously extremely well-connected, so when he suggests names, I listen closely.

Starting with Recchi, a quick look at his advanced stats tells us that he's been playing surprisingly tough competition (4th among regular forwards). His PTS/60 at even-strength (1.90) would put him third on the Oilers. More impressive, his powerplay PTS/60 (4.43) leads the Lightning.

He's definitely a useful player, particularly on the powerplay, but he's getting outscored at a nasty rate (3.44 GAON/60), he's older than morse code, and he isn't going to be a long-term solution. Plus, he plays RW. It obviously all depends on cost, but I don't think the Oilers are a Mark Recchi away from competing this year, and he obviously won't be long-term help.

Matheson also mentions Martin St. Louis, a fantastic player who I would love to see on the Oilers except for one minor problem: he plays RW. Is second-line RW really an immediate concern? He could slot in nicely on the second line over the long haul, but given his cap hit and what it would cost to acquire him, he seems like a luxury the Oilers can't afford.

Finally, Matheson mentions Alex Frolov, who would be pure gold. He's playing tough minutes (ranked 2nd among Kings forwards in quality of competition) but apparently Lombardi isn't eager to trade him. Would it be worth parting with a core player (i.e. Cogliano, Gilbert) to acquire him? I think it very well could be - Frolov fits the Oilers needs perfectly, and he's still young.

Alexander Frolov would be the ideal addition to this hockey club. Which likely means that tomorrow Steve Tambellini will send Robert Nilsson and a 2nd round pick to Tampa Bay for Mark Recchi.

Ryan Kennedy of THN is tossing out Bouwmeester for Briere as a serious proposal. I'm not sure which is worse - the Kennedy honestly believes it's a "win-win" deal, or that I could see Jacques Martin doing this.

Let me put it this way: Daniel Briere's contract is a millstone. Once you get past his one great season (which, surprise surprise, occured as he approached unrestricted free agency) there isn't much to like. He had 72 points last season and a brutal +/- (-22, easily the worst on the team). He's a flawed player and is just signed for too long and too much to be worth a player of Bouwmeester's calibre.