Oilers Corsi Over the Last Ten

Share All sharing options for: Oilers Corsi Over the Last Ten 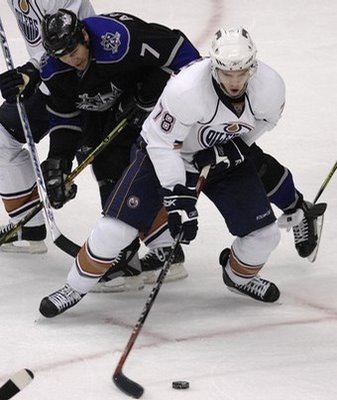 This is a quick look at the Oilers' Corsi ratings over the last ten games, courtesy of Vic Ferrari's indispensable Time On Ice program:

Fun numbers - it's probably worth noting that the Oilers' latest run at evens (which has been incredible, despite their record - only special teams have been sinking them of late) isn't really indicative of their play as a whole though, given they have an even-strength save percentage of .942 and shooting percentage of 9.7%. Roloson has looked incredible for a long while now, but .942 would seem to be outside of his actual level of sustainable ability. Still, if history has taught us anything, it's not to bet against Roloson.

As for where everybody ranks on this Corsi chart, I've highlighted the things that stood out to me. Sam Gagner's going to be a terrific hockey player when everything finally fits together consistently, and Marc Pouliot is the most consistently underrated player on the team. Beyond that, there are some real questions about Shawn Horcoff's play of late, and Liam Reddox has earned his time in the pressbox. Outside of that, I think Tom Gilbert's contributions extend well beyond his counting numbers - another season like this and I think we can safely say that he's a difference maker 5-on-5.

UPDATE: Do check out the comments section; Quain has taken the above numbers and adjusted for faceoff data, and it makes some non-trivial differences.