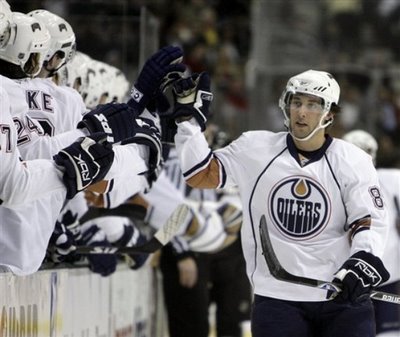 I have offered to assist in David Staples' latest project over at Cult of Hockey, namely to grade the Oilers' players on a game-by-game basis. This is a collective effort, I'm just one member of a team of markers.


After four consecutive overtime nailbiters, the Oilers were due a blowout one way or the other, and this one went the good way. Oilers rode goals from each of the four lines to stake out a 4-1 lead through 40 minutes, then tacked on four more in the third to turn it into a laugher. Where were those third period goals last week when we really needed them?

Hard to read too much into a game where the Avalanche had guys named Vernace, Galiardi and Peltier where Sakic, Stastny and Foote used to be. Still, we’ll take the two points, and hope that the offensive eruption kick-starts the offence for the stretch drive.
***
Ladislav Smid – 6: Had a tough couple of shifts early in the game including a dubious interference penalty, but got stronger as the night went on. Took yet another headshot, a cheap elbow from Laperriere that knocked Ladi down but not out. I hate to say it, but the way guys run him every night, he needs to learn to bring his stick up to protect himself. Right now he’s way too much fun to hit.

Shawn Horcoff – 6: A solid effort which wasn’t rewarded at even strength, but did contribute the game winning goal on a first period powerplay. As usual, led all forwards in TOI, a relatively light 17:22 as MacT rested his first line in the third period when they could have been out there fattening up their stats.

Robert Nilsson – 8: His line with Gagner and Kotalik had the puck on a string, especially in the second half of the game with Colorado losing interest. Earned his three assists with beautiful passes. He can be a gamebreaking playmaker when he’s on, and he appears to be coming around during the stretch drive for the second year running.

Andrew Cogliano – 5: Didn’t make a whole lot happen. Oilers were outshot 5-1 with Andrew on the ice, yet he wound up +1. Posted another dismal night in the faceoff circle, just 4-10, 29% which actually improved his faceoff percentage for the month of March. It’s hard to understand how he’s actually getting even worse on the dot, but he is.

Ethan Moreau – 7: Opened the scoring, later added an assist, helped out on a PK unit that recorded a clean sheet for the first time in 9 games, and didn’t add to the workload by taking any penalties himself. This was the "good Ethan".

Patrick O’Sullivan – 6: Did everything but finish, forcing Budaj’s best (only?) save of the night after a sweet Hemsky feed. Showed good vision at times and very nice hands at others. It seems a matter of time before he and Hemsky start to click.

Ales Kotalik – 8: After six scoreless games, the shootout winner against St.Louis may have lifted the piano off his back. Looked excellent on his natural right wing with Gagner and Nilsson, driving to the net to finish one beauty pass from Gagner, then returning the favour with a sweet goalmouth feed of his own. 4 points, +3 in just 11:10 TOI.

Steve Staios – 7: Has played by far his best hockey of the season since the injury to Visnovsky bumped him into the top 4. "Heady Steve" was on the ice for 4 even strength scoring chances for, just 1 against; contributed 3:39 to the PK unit, posted an assist, and finished the night a tidy +2.

Dustin Penner – 6: The big guy barely made a ripple on the event summary – 1 shot that didn’t get through, 0 hits, 1 takeaway, 2 blocked shots, 1 won faceoff -- but finally hit the scoresheet with 2 assists, ending a 12-game pointless drought. Finished the night +2 at evens while contributing to a solid power play unit. Played a strong game along the boards and always seemed to be to be in the right position, driving play in the right direction.

Fernando Pisani – 6: Low event game, just 1 scoring chance for, 2 against at evens. Made the most of that one chance, potting a goal on a wicked shot over Budaj’s shoulder. Had a strong game on the PK.

Dwayne Roloson – 7: Allowed a weak, weird goal early, but slammed the door after that. Did his puck batting routine a couple of times, hitting one clean single to centre and one weak dribbler to the second baseman that caused a little defensive zone grief. Picked the right night to fool around a bit.

Denis Grebeshkov – 6: Led all players on both teams with 24:41 TOI. Skated miles, 2 shots, 2 hits, 2 blocked shots, +1. Oilers were significantly outshot and outchanced with Grebs on the ice, however.

Jason Strudwick – 7: A solid effort from the journeyman. Played 18:14, including over 16 minutes at evens when the Avalanche generate just one scoring chance. 1 takeaway, 2 blocked shots, a team-leading 3 hits, +2.

Sheldon Souray – 8: The Oilers’ big bomber was firing away, leading the club with 4 shots on goal and 9 attempted shots. One of them found twine, his 21st of the season, tying Ales Hemsky for the club lead. Had a solid defensive game with 3 takeaways, 0 giveaways. With Souray on the ice, the Oilers outchanced the Avs 4-1 at evens, 3-0 on the powerplay, and 2-1 even while shorthanded.

Kyle Brodziak – 6: A decent performance centring Moreau and Penner, contributing to the perfect PK unit, and dominating in the circle (10-5, 67%). One assist, +2.

Tom Gilbert – 6: Some trouble in Oilers’ zone, including a misread on the lone Avs goal. Made up for it at the good end with 2 assists to pass Hemsky for the club lead with 36.

Ales Hemsky – 5: Somehow generated zero points and posted a -1 in an 8-1 romp. The Oil didn’t need their leading scorer on this night, but they are going to need him soon. He did make at least three beautiful passes to set up scoring chances, but the pucks are not bouncing in for Ales and his linemates just now.

Liam Reddox – 6: A fairly vanilla effort but nonetheless effective. Made a fine cross-seam pass to setup Pisani’s goal, and another to set up Souray’s shorthanded rocket which rang off the post and shook the cage. Also chipped in on the PK unit.

Sam Gagner – 9: I’ll give him a bonus point for his first (official) career hat trick, after he narrowly missed an earlier hat trick on a controversial video review in Ottawa. He and his linemates Kotalik and Nilsson had the puck on a string, racking up 11 points on the night, albeit much of the damage was done after the Avs had seemingly given up. Scored on all three of his shots. Sam has gotten hot down the stretch for the second year in a row, posting an impressive 7-5-12, +8 in his last 8 GP.