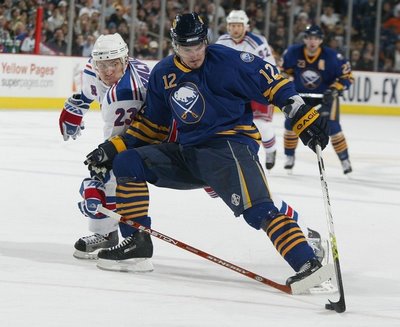 I know there are a lot of folks out there who don't like OilersNation. Personally, I'm having more fun than ever over there; mostly because there has been a lot of great stuff to talk about this past week.

Here's the best of what I've done lately:

March 13 - Pragmatism: I think that scoring more goals than the other team is the greatest goal of hockey. I can't believe that anyone would disagree with that statement.

March 9 - A Quick Dustin Penner Question: Examining the first line with and without Dustin Penner, I find that Penner's the best option on the team. People question his effort, but his results have been just fine.

March 9 - Department of Obvious Statements - Ales Kotalik Edition: Taking a good, thorough look on where Ales Kotalik should fit on this hockey team. Powerplay point-man, bottom six forward. Pretty much the opposite of how he's been used so far.

March 6 - The Visnovsky Effect: A look at the Oilers with and without Lubomir Visnovsky. They're a far better team with him.