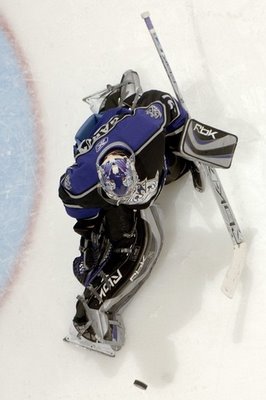 Whatever it is about Mathieu Garon this season that keeps his coaches from playing him, it seems to be catching.

Garon had a great run last season, stealing the starter's job away from Dwayne Roloson and gaining renown as one of the best shoot-out goaltenders in the NHL. Based on that, the consensus opinion was that he would be the Oilers' starter this season, and that Dwayne Roloson was a very expensive backup who should be moved to whoever was willing to take him.

Thankfully, the Oilers were unable or unwilling to move Dwayne Roloson (most likely the former - as late as last season Kevin Lowe stated that he expected a significant return in exchange for Roloson) and he was handed the starting job early into 2008-09. Many people held this up as an example of Craig MacTavish playing favorites, and while Garon certainly didn't get as much latitude as Roloson had a season earlier, it now seems likely to me that he probably looked much worse in games and in practice than Roloson had at the same juncture.

Garon's numbers on the season, combined with the reluctance of first Michel Therrien and now Dan Bylsma to give him starts rather strongly suggests that Craig MacTavish had it right when he decided to give the starting role back to Dwayne Roloson. For a guy who has been widely criticized for his performance this season, and has generally been criticized for his handling of his goaltenders, this is a call that could end up saving his job - because where would the Oilers be now without the strong play of Roloson?