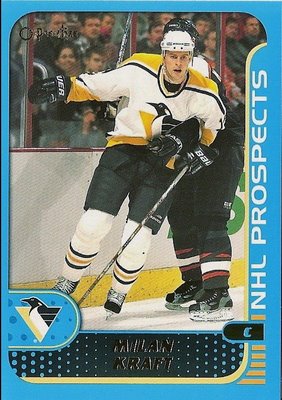 Milan Kraft is a player who has had a very interesting career. The bulk of his time in the NHL was spent with a very bad Pittsburgh Penguins squad; the Penguins were awful for a few years, although of course they're benefiting from it now. Kraft was one of the young players that they needed to make a decision on at the time. From the back of the pictured hockey card:

While the NHL (in general) and the Penguins (specifically) benefited greatly from last year's return of Mario Lemieux, Milan saw his roster spot vanish after 42 games.

There's more of course, surprisingly good writing for a hockey card actually, but we'll stop there. Kraft joined the team as they approached the precipice. This card is from his rookie season, 2000-01, a season where the Penguins played their eleventh consecutive playoff season and went to the Eastern Conference finals, losing to the New Jersey Devils. For the next four seasons, the Penguins would finish last in their division.

In 2003-04, Kraft's final season in North America he finally broke out, playing 66 games and recording 40 points. He had an ugly -22 rating to go along with those points, which was surprisingly not that bad a mark for that team - Dick Tarnstrom led them in scoring with 52 points and finished -37, while Rico Fata played his only full NHL season and went -46. Kraft went back to the Czech Republic during the NHL lockout, and with the exception of one year in Omsk he's played there ever since.

Kraft's name came up in a post today over at The Church of Kurri, a new blog written by frequent commenter Coach pb. In his rookie season, Kraft set the worst faceoff mark that the league has seen since 2000, going 37.9% in the circle.

Coach points out that Kraft's mark is not likely to outlast this season, because Andrew Cogliano has gone 37.4% in the faceoff circle through 71 games this year. This is something the Oilers need to deal with - either by moving Cogliano to the wing, or putting a centre on one of his wings to take his faceoffs for him (Marc Pouliot could fit the bill - particularly with Liam Reddox questionable after a late hit from Ben Eager).

Jason Gregor's been quite emphatic that Cogliano isn't comfortable on the wing, and I don't think that now is the time to try him out there, although training camp next year may be. The obvious, easy short-term solution would seem to be slotting Pouliot at Cogliano's LW and having him take the faceoffs. Coach suggested it in his post, and it would seem to be the sensible choice.