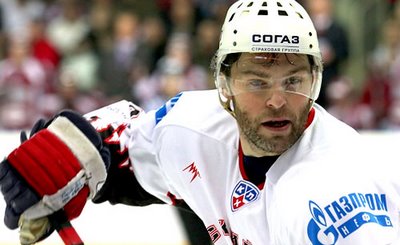 With the Edmonton Oilers still rumoured to be looking at Jaromir Jagr as a possible option this summer, I thought it might be a good time to take a look at some of the other players in the KHL. Let's use Jaromir Jagr as the cut-off point, and move on from there.

We all know who Jagr is. He recorded 71 points in the NHL in 2007-08, a total preceded by seasons with 96 and 123 points. He's a first-ballot hhall of famer when he retires, and would likely help the Oilers next year.

Korolyuk's been in Russia since the NHL lockout. The Sharks stole him with a 6th round pick in 1994 and he spent his entire career in San Jose (although he was New Jersey Devils property for a while), managing 142 points in 296 games. Never an elite offensive player, Korolyuk managed 37 points in 63 games in his final NHL season (2003-04).

Tereshenko was drafted by Dallas in the third round of the 2000 NHL Entry Draft, and has spent his entire career in Russia so far. The 29-year old had far and away his best season ever, nearly doubling his goal total from the season before. He could be a late-bloomer, or he could come back down to Earth. 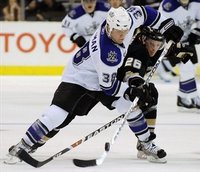 Dallman was an offensive force in junior, and put up decent point totals in the AHL, but never came remotely close to his numbers this past season in 150 NHL games spent in Boston and Los Angeles.
4. Denis Zaripov - 56GP - 34G - 31A - 65PTS (1.16 PPG)

Zaripov's a player who might be of interest to an NHL team. He actually played in North America in his draft year, putting up a 62GP - 23G - 8A - 31PTS stats line for the Swift current Broncos in his draft year. He was not drafted despite the goal scoring and some decent size, and he's been an elite player in Russia for three years running now. He's still young; he turned 28 today.

Jagr gets the press, but if the Oilers are interested in adding some KHL scoring, Alexei Morozov could be a better option. He had three nice seasons with Pittsburgh before the lockout, but returned to Russia for 2004-05 and has been a difference maker there ever since. The KHL typically is a much lower-scoring league than the NHL, and it seems reasonable to think Morozov could be a big help to an NHL team right now.

Marek was drafted as a 24-year old in 2003 by the New York Rangers, but has played exclusively in Europe. He's smallish but has been an offensive difference maker in the top czech league since the year before he was drafted, and has been a point per game player for three years now in Russia.

Mozyakin (on the left, talking to a bundled-up Alexander Radulov) was a Blue Jackets' pick in the 9th round of the 2002 draft. He spent four games in the QMJHL in 1998-99, but other than that seems to have played exlusively in Russia. He's been a star over there since 2005-06, and is still only 28 years old. He is another smallish forward, but you have to wonder if he couldn't help an NHL team.