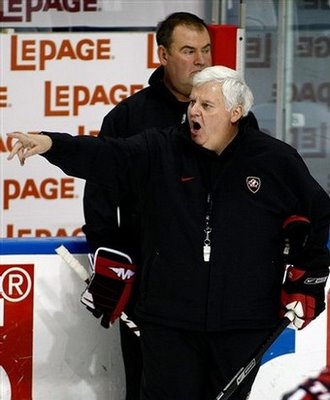 Like any Oilers' fan who followed this team from 1997 to 2003, I harbor deep animosity towards the Dallas Stars. On the other hand, I have a ton of respect for their longtime coach, Ken Hitchcock. Hitchcock's record is excellent, and his work in Columbus is only adding to his reputation.

It was interesting to hear that he blew a gasket in practice this morning. From the Columbus Dispatch's Puck-Rakers blog:

About 20 minutes into the morning skate in St. Pete Times Forum, Blue Jackets coach Ken Hitchcock brought practice to a screeching halt with the blow of his whistle, summoning all the players to center ice.

The reason for this tirade? Aaron Portzline speculates that "one could surmise that, after giving the Blue Jackets an entire day off on Sunday, the coach was just waiting for a reason -- maybe even looking for it -- to grab the players attention". Portzline goes on to point out that the blue Jackets' opponent tonight, the Tampa Bay Lightning, are the second-worst team in the NHL. If Portzline's guess is correct (and I think it is), Hitchcock could just be looking to ensure that there isn't any lapse in effort against the Lightning tonight. It seems like an idea that has a decent shot at working out for him.

Kevin Allen of USA Today polls some notable sportswriters for their opinions on the major trophy races in the NHL. It's an article that features some excellent analysis and some rather notable blindness. To begin with, the good, which surprisingly comes courtesy of Pierre McGuire:

"Without (Ovechkin), the Caps would have a tough time being a home ice playoff team. He makes everyone better as teams tailor make their game plans to shut him down. That opens up room for the other players to get things done offensively."

McGuire makes an excellent, and often overlooked point with that second sentence. Teams generally tailor their gameplans around the opposing team's best player (I imagine a bunch of people going "so?" right now). Here's the point: what do teams do to tailor their gameplan? They match lines.

This is why Quality of Competition matters, why it's important for people watching the game to see not only who is playing on their team, but who they are playing against. When McGuire says that Ovechkin "opens up room for the other players", he means that because the other team's best option to contain offense (be it an old-school checking line or the more common power-vs.power alignment) is being deployed against Ovechkin, meaning that everyone else sees easier opponents. It makes a difference, and I can't even begin to understand the sort of mindset that dismisses it out of hand.

As for the bad, I'm very glad that it's NHL GM's, not the sportswriters, who vote for best goalie. Allan's panel awarded points in the following order:

That's atrocious. I can see a conversation between myself and whoever thinks Kiprusoff has been one of the five best goaltenders in the league right now:

ME: Kiprusoff has a .904 SV% on one of the best teams in the NHL. That's pretty brutal.
RANDOM WRITER: But he has 42 wins, and most importantly the Flames play with more confidence in front of him!
ME: That's because his backup is Curtis-freaking-McElhinney, a guy so bad that the Flames brought in the decaying corpse of Curtis Joseph last season because even after he dropped his walker he was more likely to make a save than McElhinney. Well we're at it, he was equally as likely to make a save as Kiprusoff last season, and this year he's getting lit up on an inferior team.
RANDOM WRITER: But.. confidence.. (unintelligible)

While we glance through this stupidity, let's note that Martin Brodeur (who has only played 22 games) somehow gets points, but Mike Smith - who has a .916 SV% for an incredibly bad Tampa Bay Lightning team - is omitted entirely. What more do people want to see out of Smith?