I Hope There's A Really Good Plan B

Share All sharing options for: I Hope There's A Really Good Plan B 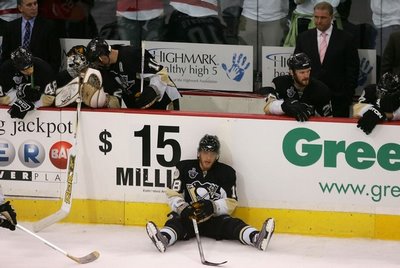 On March 21st, Dan Barnes of the Edmonton Journal gave us the following information:

Team sources confirm the Oilers will definitely chase younger offensive alternatives this summer and Marian Hossa is atop their list.

That line was a footnote in a tremendous article that explained the Jagr situation and gave the most plausible method the Oilers could have used for sneaking him through waivers. From that article, it would appear that Jaromir Jagr will be a player the Oilers will consider if they're shutout of the Hossa sweepstakes. (As a side-point, the work of Barnes and Matheson is the biggest reason why the Journal is the newspaper that's worth reading when it comes to the Oilers).

Speaking of Hossa, he made some recent comments about his thought process this summer:

"To be able to stay as a Red Wing, I am prepared to take less money, but a fair deal, so both sides are happy. That's what I'm looking for. I know if I go somewhere else, I could have more, but I'm willing to take less to stay here. Hopefully things work out."


I sure hope that Steve Tambellini is ready for Plan B, because I'm thinking that he's going to need it. Hossa had a rich offer last summer and turned it down, and there's little reason to think that the same reasons won't drive his decision this summer.

Jaromir Jagr isn't a great Plan B (he's old, he's a RW, etc.), but I suppose he's better than no plan at all. As a likely-unrelated side point, Jagr's good buddy Martin Straka is probably avialable this summer too.