Hey - Terry And I Agree On Some Stuff!

Share All sharing options for: Hey - Terry And I Agree On Some Stuff! 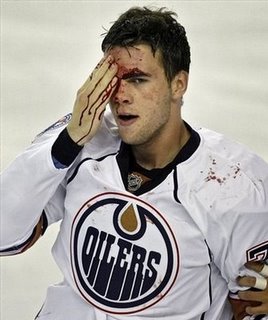 Has anybody read Terry Jones' latest column? I know this is a strange thing for me to say but beyond a few bizarre assertions, he's right in the assessment he does of the team.

He opens with the pessimism, saying (albeit in far more grandiose words) that the Oilers aren't likely to make a major move. He's right. Then he goes through every player on the roster, and lists guys who are either untouchable, not worth trading/difficult to trade/not worth much, or may be traded. Let's review each category.

Roloson, Cogliano, Grebeshkov, Souray, Gilbert, Hemsky and Gagner. I agree with that list for the most part (with the usual "nobody is untouchable" caveat) , although I'd be willing to listen to offers on Souray (supposing he'd be willing to waive his NMC), and I don't see Gagner/Cogliano both being on the roster long-term. Still, I don't think Cogliano/Gagner should be dealt now anyway. Jones also suggests that there's no reason to move Strudwick because of his versatility (although personally, I'd list him as a low-value acquisition anyway).

I have no real arguments here, although I think the real reason Horcoff won't be traded is because moving him would leave a massive hole at centre - already a position of weakness.

Jones figures Staios probably won't be dealt because of his value, but that he's a possibility. Personally, I think he won't go anywhere because of his massive long-term contract (and the fact that he's a third-pairing guy). Jones also figures that Cole doesn't have much value, although I'd disagree with him there (we should see shortly).

Lastly, Jones says that Pisani's excellent play since his return makes him very tradeable, to which I have two questions:

1) What excellent play?
2) If he's dealt, and Cole's dealt, who exactly plays RW? Hemsky-Stortini as the top two?

I strongly disagree with him on Pisani, but other than that he's painted a relatively accurate portrait of the Oilers at the deadline.