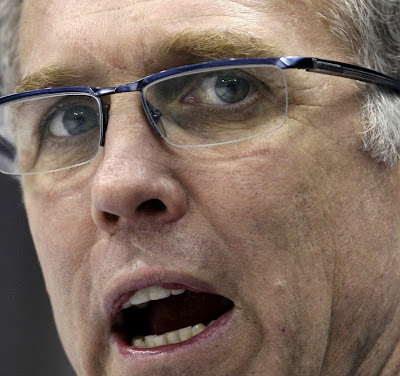 Got a beauty email from a friend, let's call him "Dave", who has been a season ticket holder for a number of years. Other than his association with me, Dave doesn't frequent the Oilogosphere. It was interesting to read his independent conclusions, so much so that I asked and received his permission to post his comments here. I thought it would be a nice change of pace for my blog to have a post that featured short sentences, each one that actually had a point.
***


As for the Oilers:
Color them dark brown, as in done like a Sunday roast.
The two Minny games and the Phoenix game amply pointed out the prime problems.
There's no passion. The Coach yawns through games.
This is a a passive collection of individual players, not a team.
There's no real leadership, starting right at the top, but mostly behind the bench.
There is no obvious focus, strategy, game plan or set of tactics other than passive defence and inflexible offence.
The penalty kill consists of a simple box with no puck pressure.
The power play consists of "ring around the rosie" then pass to Souray.
Defence is "active sticks'" positional play with little physical play or puck pressure.
A one goal lead is protected by single player forecheck and "back up like mad" defence.
Breakouts are based on multiple in-zone passes until the other team is organized, followed by slow movement through the neutral zone.
Offence consists of drop passes and making plays at the offensive blue line.
Nobody is encouraged to dump and chase.
Leaving a defensive position to recover a puck broken loose by a good forecheck or hit is discouraged. They never outman the defence in the oh-oh zone.
The best scoring player is harangued by the coach to play defence.
The +/- leader is relegated to the 4th line while the No. 1 line is deep in the +/- hole.
The line blender get turned on every second period.
The big bruiser gets left in the press box so the skilled players get pushed around.
The No. 1 goalie gets worked until he starts giving up bad goals from fatigue.
Four lines get played regardless of the score, until the 3rd period at least.

I hope they finish 12th. Maybe that will finally push the owner into making the necessary changes in management, the coach for non-performance and Mr. Lowe for not recognizing the fundamental problems and dealing with them. At least I wouldn't waste money in a fruitless first playoff round and the possibility that the futility would continue next year.