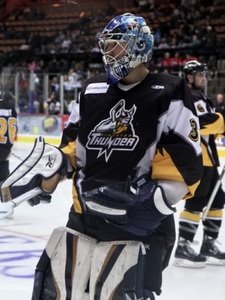 The goaltender pictured is Bryan Pitton. He's had a bad season in Stockton as a rookie pro, getting handily outplayed by his backup, the undrafted Andrew Perugini. Here are their numbers:

Imagine my surprise when, this morning, I came across the fact that Bryan Pitton has been recalled by the Springfield Falcons. Bizarre, yes?

So I looked around for some sort of reason for the recall, and found nothing. I knew that on Tuesday, Devan Dubnyk had a collision with the Manchester Monarch's Marc-Andre Cliche, but I've seen nothing to indicate Dubnyk was hurt on the play, and he did finish the game. Then a possibility occured to me.

Earlier in the year, Perugini and Pitton were sent to the ECHL while journeyman minor-leaguer Glenn Fisher was the backup in Springfield. It was a strange move, given that Fisher's ECHL save percentage the year before had been only .903, but it soon made sense. Dubnyk played every game until he was too weak to strap on equipment, and then Fisher would get a start. I suspect that something similar is happening here.

Why, though, would this organization need a backup, with Dubnyk and Dany Sabourin providing effective AHL goaltending? Well, with the passing of the trade deadline, roster limits are relaxed, allowing the Oilers to have more than 23 players on their NHL roster.

I believe the Oilers are going to call up Dany Sabourin. Does anyone have an alternative theory?

Pitton was apparently recalled as a precaution; Dany Sabourin suffered an injury that turned out to be minor. So much for reading the tea leaves.