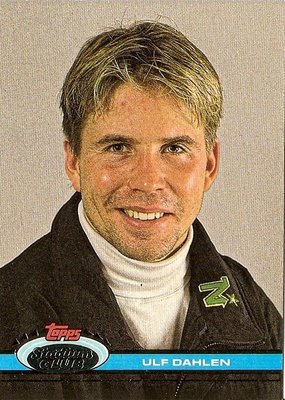 Ulf Dahlen is one of the few Europeans to ever gain much traction in NHL coaching or management. Alpo Suhonen and Ivan Hlinka both had one year in the job in 2000-01 (Suhonen resigned after the season, Hlinka was fired four games into 2001-02). They were the first European head coaches at the NHL level since Johnny Gottselig back in the mid 1940's.

Dahlen spent a few years as an assistant coach to the Swedish National Team before he was hired as a European scout by the Dallas Stars (the team he played his final NHL season with). He served in that capacity for a single season, joining Dave Tippett's staff in 2006-07. He spent two seasons behind the Stars bench before heading back to Sweden to be the head coach of the Frolunda Indians, guiding them to a third-place finish in the Elitserien (25-20-10 - 10 being ties, not OT losses). My Swedish is a little bit nonexistent (slutspel=playoffs, yes?), but from their official website it looks like they've cleared the first round, beating Lulea (current home of Linus Omark) in five games and are now tied at one game a piece with HV 71 in the second round.

This would seem to be the glass ceiling of the NHL; there have been a handful of European assistants (Ulf Samuellson serves on the staff in Phoenix, as an example) but very few head coaches. It may be that the level of coaching talent is lower over there; based on Dave King's book it would seem that line-matching is still a foreign concept to most. On the other hand, it's hard to believe that none of the more successful European coaches could accomplish anything in the NHL.

Leaving aside coaching, the likeliest candidate to have serious success in the NHL would seem to be Jarmo Kekalainen. Kekalainen spent four years as the General Manager of IFK Helsinki and the chief European scout for the Ottawa Senators, subsequently joining the Senators full-time in 1999 as Director of Player Personnel. He spent three years in that position before joining the St. Louis Blues as assistant G.M and Director of Amateur Scouting. Here's a list of players the Senators pulled from Europe during his time there who went on to play in the NHL:

Kekalainen's worst bust in Ottawa was probably Klepis, who was selected one pick after Jussi Niinimaki. No player drafted higher than 60th overall out of Europe during Kekalainen's tenure ever failed to make the NHL, and even in the late rounds more players made it than missed as seen on the list above. As much as I liked the Steve Tambellini hiring (outside the organization, nice looking resume), I would have been ecstatic to see Kekalainen as the Oilers' GM. Hopefully he'll get a chance, somewhere.

Going back to Dahlen, he played four seasons for the Minnesota North Stars and was on the team that relocated to Dallas for the 1993-94 season. It's good to see a team in Minnesota again, although it's less good to see that they aren't that far behind the Oilers. Counting today's game, the Oilers will play Minnesota twice before the season ends, and you have to think that the Wild have targetted the Oilers as their best chance at a playoff spot - especially given the Oilers' difficulty with them in recent years.