For Those Of You Who Feel Sam Gagner Could Be Traded

Share All sharing options for: For Those Of You Who Feel Sam Gagner Could Be Traded 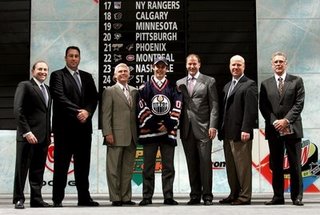 For the record, I like Sam Gagner. I think his season this year has been better overall than last, even if the points totals aren't as impressive.

In any case, I thought it would be a fun exercise to compare Gagner's first two seasons with those of another player who we're all familiar with.

It's worth noting that Hemsky's teams were superior; thus the gap in +/- is not nearly as close as it appears season over season. In fact, his -7 as a 20-year old was the worst number on the team.

I really don't see much to chose from there. When you consider too that Sam Gagner did it a full year younger than Hemsky (which matters, believe me), it's even more impressive.

Sam Gagner's not going anywhere. That's how it should be.