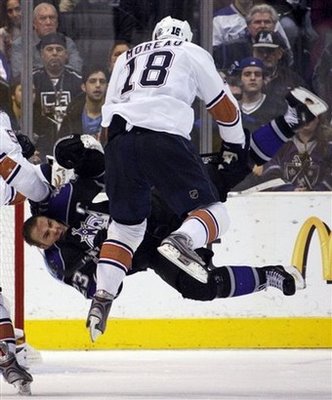 The picture here is Ethan Moreau hitting Dustin Brown, taken from a February game against L.A. Brown had taken a run at Ladislav Smid, and Moreau decided to avenge him with one of the best open-ice hits I've seen in some time. Moreau subsequently fought Matt Greene, in what has become a common (even expected) response to big hits. If you missed it, the entire sequence is worth watching and can be found here.

Of course, Ethan Moreau himself hasn't always responded to hits in kind; likely we all recall Daniil Markov's big hit on Jarret Stoll that Moreau decided to address with his fists. Moreau wound up sidelined with a dislocated shoulder.

In any case, the tradition of responding to big hits with a fight brings me to today's Ken Campbell column. Campbell's a veteran writer for The Hockey News and one of the more interesting reads out there. I frequently disagree with him, but he's a bit of a contrarian and I've often come away from his work with an expanded mind - and that's not faint praise.

Campbell discusses the recent recommendation made by NHL GM's - to add a 10-minute misconduct to staged fights, and further use of the instigator penalty. Here's the relevant quote:

If the NHL accepts the recommendation from the GMs that the rulebook actually be called from now on when it comes to instigators, it may actually cut down on the number of fights in the future.

But instead of making the NHL less physical, there’s a good chance there will actually be more clean bodychecking in the future than there has been in the recent past. To their credit, the GMs recommended referees be more vigilant in calling the instigator penalty, particularly as it relates to fights that are started after a player has been hit with a clean check.

Imagine that. Players who play an honest, physical game will now be able to go out and do their thing without having to worry about being attacked for doing something that is totally acceptable in the NHL rulebook. If this new enforcement gives players that kind of freedom, you’re bound to see more hits.

I completely agree with Campbell as to the likely consequences of this rule change, and I agree in some respects. Personally, I think this sort of rule change goes hand in hand with the headshot rule proposed by NHLPA head Paul Kelly, and that they should be implemented together. Otherwise, "clean" hits can continue to injure star players (and young players seem to be especially susceptible to this) with no immediate consequences.