Every So Often, You Read Something Crazy

Share All sharing options for: Every So Often, You Read Something Crazy 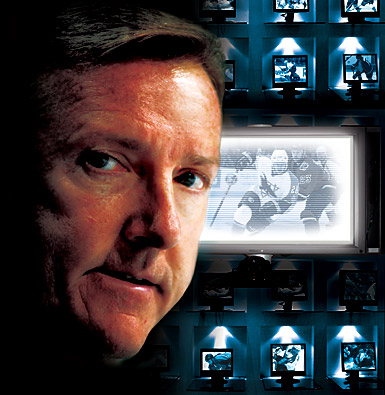 Most everybody who has been following Oilers' hockey the last little while knows the name Peter Adler. Most recently, Adler's name surfaced because he was the one who told David Staples that the Oilers were taking a serious look at bring Jaromir Jagr to Edmonton. Staples has regularly cited him in his reports, and he's clearly got a good idea of what's going on around the hockey world. He's both experienced and connected.

On the other hand, today he wrote a piece at the Cult of Hockey that left me rather astonished, from beginning to end. For starters, there's his first sentence:

Hockey, originally a Canadian national game, has become way too Americanized. And that's what's wrong with it.

Well, there's nothing like a cheap appeal to nationalism to get your point across, is there? I've spent some time in the States, and I have no desire to live in that culture - the difference between here and there is palpable. On the other hand, the implication that Canada=good and America=bad as a rule is asinine. The notion that the primary ill of the game is that it has become too American is something you wouldn't even expect to see Don Cherry advance.

I'm going to skip the bit where Adler implies that the institution of video coach is a waste, since that hardly needs rebuffing, and move on to the next point:

You see, hockey, [coach Ivan] Hlinka liked to say, is a perfectly simple game. It begins at zero-zero, lasts three times 20 minutes, and the puck is round. That's all one has to know. Adjusting my team's game to the opposition's game? Don't be silly. Either my team's playing well enough and we win, or it isn't, then we lose.

I realize that Adler is paraphrasing Hlinka (fired four games into his second NHL season), but I'm not sure which is worse: the arrogance or the imbecility of this position. It's like when you play chess - the opposition's pieces don't matter, either your strategy is brilliant enough or it isn't, right?

Cocky? Absolutely. Considering everybody and their dog keeps talking about confidence as a major contributing factor to winning (and lack thereof to losing), this kind of cockiness should be a must rather than an exception.

You know who was confident? George Armstrong Custer was confident. Custer was so confident that when he entered the Little Big Horn, he didn't want to kill the Indians - he wanted to capture them. He was so confident that he opted not to take Gatling guns with him; he felt the extra weaponry wasn't worth the loss of mobility. In short, the idea that confidence directly translates into victory (an idea held by others besides Adler) is just a touch ridiculous.

The worst thing happening through the last decade is the increasing stress on statistics.

This is amusing, given that both the statistics and video that Adler so hates were primarily instigated by the work of Roger Neilson, back in the late 70's.

After listing the pile of statistics that NHL teams provide to the media after each game, Adler makes the following statement:

Real life differs slightly. If a coach can't make those decisions without consulting the statistics, that coach has no business coaching, especially not coaching professionals.

Best let Ron Wilson and Roger Neilson know that their statistics are without merit.

Baseball aficionados will try to teach the uninitiated that there are some deep, dark secrets involved in their game that make it look and feel almost like chess on artificial turf. Look, he moved his left eyebrow ever so slightly to the right and then up, and that means . fill in the blanks. And all that nonsense is based on - guess what? - right! Statistics!

Actually, putting meaning into a player's facial expression would be a hallmark of the "saw him good" crowd - and not even the good ones of course, just the ones that most competent observers deride (look at Cole's face - MacTavish has lost the room).

I'm going to stop here because honestly this column is so far out to lunch that it almost doesn't need rebuffing. I'll skip the bit about how this rocket scientist/brain surgeon approach to hockey hasn't sold the game in non-traditional markets, and the rather tedious demand to "bring the game back where it belongs", because these are bizarre arguments.