I posed this in the comments section at Lowetide's joint the other day:

League-wide, there are 135 forwards on playoff contending teams that are playing 12 mins+ of ES a night.

Conclusion: Ethan Moreau is the worst forward on any of the 21 teams in the playoff race.

Neither Cogliano nor Pouliot make the list of 135 because they aren't averaging 12 mins of ES time a night, but it's useful to see their numbers in the same context if either were playing 12 mins a night:

Moreau's GF/60 is barely statistically different than Cogliano and is very easily accounted for by the time that he spent with Horcoff, where they average 1.775 GF/20 together. [Check this on the HockeyAnalysis page under ES Goals For with Teammates - with Horcoff, Moreau has 7 GF in 79 minutes of time.] So since Ethan Moreau is so bad, he's clearly bringing Cogliano and Pouliot down, right? Maybe not. Back to Stats.HockeyAnalysis.com, let's check the kids with and without Moreau: 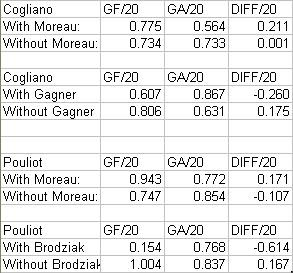 Pouliot's falloff without Moreau is perhaps explained by being teamed with Kyle Brodziak and Jason Strudwick most often away from Moreau and Cogliano. Cogliano, on the other hand is a different story. He's worse away from Moreau, and his linemates away from Moreau and Pouliot are Sam Gagner and Robert Nilsson. Is it Cogliano that is slumming with Moreau, instead of being held back by Moreau? He's not playing with the end of the roster, so let's look elsewhere. Vic's timeonice charts should allow us to determine just what's going on with Cogliano.

The first line chart [player 99 is the line combination] looks at Moreau, Cogliano, Pouliot together, they've played 25 games together. The combined line stats are much stronger than Cogliano's individual numbers, it's barely outscoring, but it is. It's getting outshot a bit, but I don't think this line is holding Cogliano back. Maybe it's just Moreau and the numbers at Stats.HockeyAnalysis.com are flukey. The second chart shows Moreau and Cogliano with random linemate. Huh. In 50 games together, the numbers aren't all that awful - certainly the EVsave% is worth a mention as .943 when they are on the ice won't be sustainable and should cause howls when it regresses, but again, doesn't seem that Moreau is the anchor here, either. Again, breaking even in the scoring department and getting outshot. It helps when your goalie is throwing up .943 behind you.

Now, last year and this year's early season, much-vaunted kid line in 32 games. Outscored by two goals, and outshot, nothing completely egregious here. These are the talent, playing softies and they aren't scoring all that much, in fact, Cogliano scores less when he's playing with the talent against buttery soft minutes. Why?

What is my conclusion? I have no idea -- maybe commentors will help a bit. My original premise when I started this was "Moreau stinks, let's see how bad the stench is". And possibly discuss how he's retarding both Cogliano and Pouliot's development. I still believe that he stinks, now I believe that Cogliano is not doing his part in his own development. Remember, he's playing against extremely soft competition - MacTavish is killing Shawn Horcoff and making Brodziak climb mountains in order to shield Cogliano and Gagner.

Part of the problem with measuring Cogliano's production and looking at his numbers is that the guy never starts with the puck. His faceoff percentage is 37.8% for the season and In the last eleven games, he's 33W 88L for 27%. In the last five games, he's 19% - 8W 35L. He's getting worse as the season goes on! I think that the next Oilers coach should give very serious consideration to making Cogliano a right wing. His scoring chance numbers, tracked by Dennis and compiled by Scott at the Gospel Of Hockey far outpace Moreau and one would think they would only increase if he ever had the puck.

In conclusion, Ethan Moreau stinks. Andrew Cogliano is not doing as well as he should.