The Devil in the Details

Share All sharing options for: The Devil in the Details 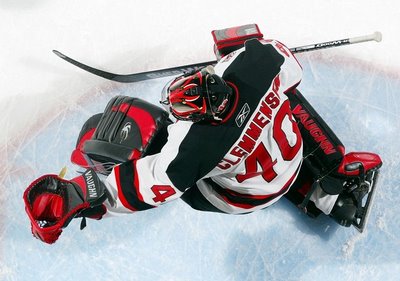 Dave Hodge of TSN had the following blurb in his latest blog:

Thumbs up to the New Jersey Devils. We're noticing them now because Brodeur is re-writing the goalie record books, but with Brodeur, Kevin Weekes and Scott Clemmensen in goal, the Devils have been nothing less than the NHL's best team in the second half of the season.

Yes indeed, they have. It's a funny thing to run the numbers that the Devils goaltenders have put up this year, because they're so... uniform:

In a week where Martin Brodeur passed Patrick Roy as the league's all-time wins leader, it is perhaps slightly unsettling to note what's happened to Clemmensen in the meantime.

You see, with Martin Brodeur injured, the Devils called up Clemmensen on an emergency basis - which meant that when Brodeur returned, Clemmensen could be demoted to the AHL without needing to clear waivers. That's what Lou Lamoriello did, rather than risk losing Kevin Weekes for nothing on the waiver wire. Clemmensen's record in the AHL stands in contrast to his fine NHL numbers:

That could be explained by any number of things: for example, it's entirely possible that Clemmensen's in a bit of a funk because after winning 25 games for his NHL team, he was discarded in that casually cut-throat way that Lou Lamoriello does so well (see: Mogilny, Alexander for another example).

On the other hand, a quick glance at the history of Clemmensen and Weekes shows both to be nothing special as NHL goaltenders; Clemmensen is a minor-league journeyman, while Weekes has moved from NHL team to NHL team until somewhere along the line he ceased to be a "future starter" and turned into yet another one of those generic 1A/1B-type goaltenders. I am of course not arguing that either is on par with Brodeur, despite the similarity in their numbers this season.

What I am arguing is that Brodeur's numbers are certainly at least in part a product of playing for one of the most successful, defensively sound NHL franchises over the course of his career. How much of his reputation does he owe to his team? That's a question that probably won't ever be answered.