Share All sharing options for: Dan Barnes: My Favorite Columnist 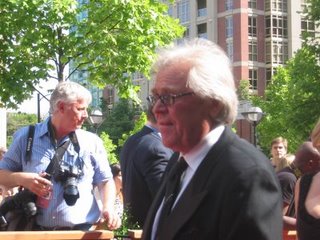 I'm a young guy; I only turned 23 a little earlier this month. The Oilers teams that I get all nostalgiac about never featured Wayne Gretzky. I've watched plenty of video, and because of my Finnish heritage I've got a soft spot for Jari Kurri, Esa Tikkanen and Reijo Ruotsaleinen, but I never saw them play live.

My memories of Glen Sather are as an overpaid executive who parlayed his glory days with the Oilers into a big money job in New York City, and has done a lousy job of running the franchise ever since. Come to think of it, that's my current assessment of the man; the Wade Redden signing was easily the worst of this summer's UFA season, and it's rare that one is so clearly above the pack. But I digress.

Despite my youth, I have a real appreciation for history - hockey and otherwise, and some of my favorite blogs (Lowetide, Oil Droppings and BDHS to name three) are my favourites because the guys who write them have a feel for not only what the game is but also what it was. In any case, I'm always eager to find out what happened, why it happened, and all the rest - the back story just interests me.

Dan Barnes, probably the best of the print media these days (although of course Matheson's a guy I read a lot too) has a nice piece today about Sather and Pocklington. Here's an excerpt:

In 1998, when Pocklington wound up in major financial difficulty and had his team sold out of receivership by the Alberta Treasury Branch, he nonetheless found a way to take care of Sather, who received a massive fee as a condition of the sale to the Edmonton Investors Group. It has been a mutually beneficial relationship, obviously.

I'm sure that was common knowledge for a lot of people who were paying attention at the time, but I didn't know that. And while everything I've ever heard or read tells me that Pocklington's a straight-out-of-Dilbert weasel, that article made it clear why Glen Sather would be willing to stake one million dollars of his own money as bail. If, like me, you're a little sketchy on some of the details behind these guys, it's an article you'll want to read in its entirety.