Share All sharing options for: Dallas Loses Game and Star 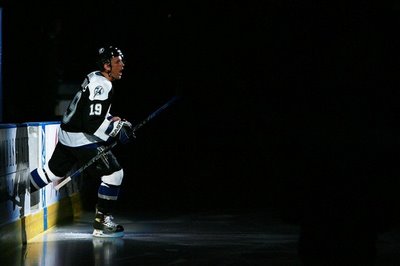 Future Greats and Heartbreaks remains my favorite hockey book. I've talked about it before and if this site is running in ten years chances are that I'll still be mentioning it.

One of the stories that Gare Joyce tells involves Don Murdoch, a former player (with many stories) who in 1998 was the head scout for the Tampa Bay Lightning. The Lightning were a disaster at the time; ownership was a mess and about to change hands, and G.M. Phil Esposito was running the club into the ground. Because of the pending sale to Art Williams, the owners at the time slashed the team's operating budget, leaving the scouting staff (all four of them) with barely any money to pay for travel.

As fate would have it, the Lightning held the first overall pick in the '98 entry draft. Since their scouts had narrowed down their candidate to two players, Vincent Lecavalier or David Legwand, Murdoch concentrated his efforts on watching those two players. Of course the Lightning selected Lecavalier, a decision that turned out to be completely correct. I'll let Joyce tell the rest of the story:

Few took note of it then, but the Lightning's next pick came in the third round, and Murdoch again took a player from Rimouski. That had other scouts smirking at their tables. They didn't have this Rimouski player anywhere close to 60th overall, the slot where Tampa Bay selected him (note: 64th overall, actually). They put it down to Tampa's tight budget limiting Murdoch in the field. And maybe there was something to that. As it turned out, Brad Richards not only led Rimouski to the Memorial Cup in 2000, but also won a major NHL trophy before Lecavalier did. Yet, by the time Richards hoisted the Stanley Cup and was handed the Conn Smythe Trophy, Murdoch was long, long gone from Tampa Bay - he was coaching in the low minors and would soon be out of hockey.

Brad Richards turned out to be a tremendous (albeit overpayed) player. He was eventually traded to Dallas for goaltender Mike Smith and change, and is an incredibly important piece of their current team. He broke his wrist on February 16th (Dallas went 5-9-1 in his absence) and returned to the lineup today against the San Jose Sharks.

Richards went -2 in the 5-2 loss to the Sharks, but broke his other hand in the game. The Stars are three points out of 8th in the West and five points back of Edmonton, and Richards' latest injury may spell the end of their playoff hopes.